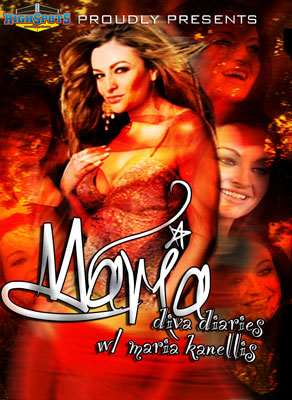 It’s been about five months since Maria Kanellis was released from the WWE but boy, what a busy five months it’s been. From ‘The Celebrity Apprentice’ to her debut EP, ‘Sevin Sins’, Maria has been juggling several projects. The latest of her projects are two shoot interviews: one for Highspots.com and one for Kayfabe Commentaries. Today, we’ll be looking at ‘Diva Diaries with Maria Kanellis’, her shoot interview for Highspots.

Filmed while ‘Apprentice’ was still on the air, the shoot opens with some talk about the show and how Maria got involved. She recalls that Donald Trump personally asked her to do the show last year when he appeared on Raw and ‘bought’ the show. Kanellis also reveals that she would love to be a contestant on ‘Dancing with the Stars’ and came close to joining the show last year but cited ‘conflicts’ leading to her ultimately not doing the show. She leaves it to the viewer’s imagination what those conflicts may have been — though it’s not really hard to work out what she’s referring to. Seems like WWE didn’t want her on ‘Dancing’ for fear of another Stacy Keibler situation.

The very peppy and talkative Maria seems full of life in this interview, nicely playing off the interviewer who later jokes he now gets why Maria was released as she pokes holes in WWE’s wellness policy, and the use of the phrase ‘independent contractors’. Her opinions on the subject are incredibly thought-provoking and if you thought Kanellis was the ditzy girl she played on WWE television — think again. Her arguments were extremely strong on these subjects in particular. Maria comes across as a business-savvy, smart, confident woman.

Now, I know what you’re all waiting for: juicy gossip. Well, without giving too much away, there are some very juicy comments throughout the shoot. For example, did you know Maria was supposed to host [or perhaps co-host] NXT? Obviously, that role then went to Matt Striker and she was released the same week that the show premiered. There’s also plenty on her relationship with CM Punk.

Commenting on the lack of effort put into the Divas division and her frustration during her time there, she says that this is a wide spread feeling amongst most of the Divas — though obviously, no one will come out and speak for fear of losing their jobs. And who can blame them for being frustrated? Being sent out to the ring for two minutes and doing a whole lotta nothing is just as frustrating to us fans as it is them. But a girl’s gotta eat, right? She does go onto reveal that all of the Divas are constantly pitching ideas to the creative team.

Kanellis puts over Michelle McCool as someone who always helped her learn, no matter how much she may have messed up, Michelle would always let her try again. However, there are two Divas who may not be as happy with Maria’s comments. You’ll just have to check out the DVD to find out!

In all, this shoot was a lot of fun and there is plenty of juicy gossip that I haven’t even touched upon. Really, it’s just too much to put into words. Maria is full of energy and personality; a far cry from the generic babyface persona that WWE had her and many of the other girls portray. This is something she, herself, touches upon in the interview too.

Verdict: Whether you like Maria or not, I don’t think you’ll be disappointed.
Rating: 3.5/5