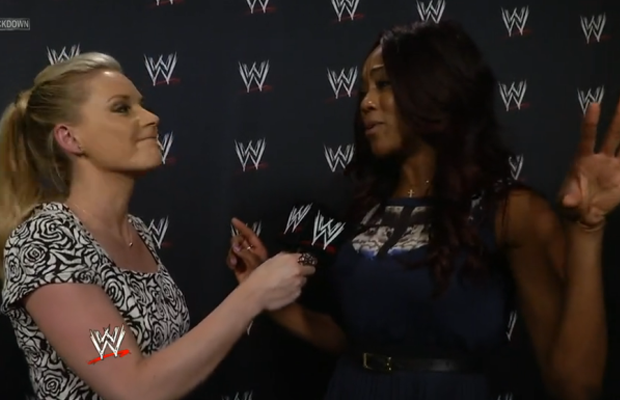 Layla‘s apparent heel turn and new-found partnership with AJ Lee have flabbergasted Kaitlyn, the WWE fans and the other Divas in the locker room… including the woman who is known for turning heel as often as she changes her clothes, Alicia Fox!

Foxy caught up with Renee Young on the WWE App to discuss Layla’s new attitude, saying that she was always suspicious of her friendship with Kaitlyn.

“Being the fact that Layla has that whole history with Lay-Cool, and not really having many friends, I mean, what else would you expect?”

Renee asks Alicia to come right back to the WWE App if she has more beans to spill; it seems like Alicia could be turning into WWE’s resident gossip girl!

Layla turned on Kaitlyn on Friday’s SmackDown after stepping in the way of Kaitlyn’s Spear, which allowed AJ to take advantage and make Kaitlyn tap to the Black Widow.

Why do you think Layla turned on Kaitlyn and aligned with AJ?