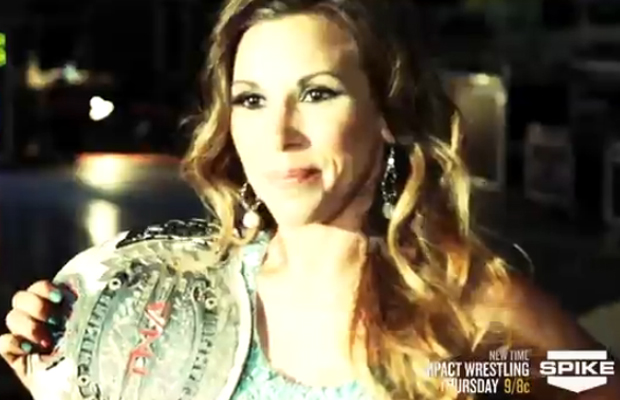 This past Thursday on Impact, it was announced that TNA Knockouts Champion Mickie James would defend her title against Velvet Sky on this week’s edition of the show.

Brooke Hogan also announced that Taryn Terrell and Gail Kim would face off in a Ladder match and that the winner would earn a shot at Mickie James’s Knockouts Championship.

While fans are hyped for these matches, one person who doesn’t seem too thrilled about the possibility of facing these ladies is Mickie James herself. Inside Impact caught up with Mickie backstage to get her thoughts on the upcoming Ladder match.

“You know, I don’t think Brooke gives me the recognition I deserve. Yeah, they had a great match but I’ve had awesome matches, amazing matches that I don’t know if she didn’t watch them or what. Whatever, I’m still the champion so it doesn’t matter,” Mickie said when speaking about Gail and Taryn’s Last Knockout Standing match.

James has been embracing her newfound bad girl attitude, rolling her eyes and mocking the other Knockouts during last week’s Impact segment. If she can beat Velvet this week, she will have to face Gail or Taryn whether she likes it or not.

“I think Gail is one of the best female wrestlers in the world. I have tons and tons of respect for Gail as a competitor. And for Taryn being as new to this as she is. I mean she took the stripes off, learned how to grab a headlock and now she’s in Ladder matches…so, I hope being the stuntwoman that she is that that helps her in taking on an amazing competitor such as Miss Gail Kim,” Mickie sarcastically stated about the two Knockouts.

Mickie may have to worry about Gail Kim or Taryn Terrell coming after her belt, but first she’s got to get past Velvet Sky on Impact. Check out Mickie’s full interview below:

Do you think Mickie’s confident or actually afraid of Taryn and Gail?