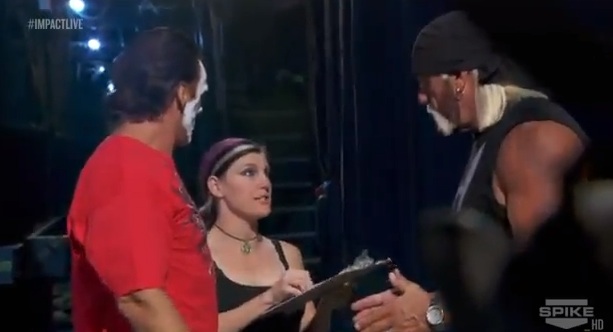 Bates appeared in a backstage segment with Hulk Hogan and Sting, masquerading as a stage hand asking Hogan, Impact’s General Manager, to sign some documents before spraying both of the legends in the eyes with some sort of substance. Leva was revealed to be in cahoots with the Aces & Eights group who then attacked the pair and abducted them.

No word yet on whether Leva will have a permanent role with TNA going forward or if it was a one-time appearance.

Bates has built up a cult fanbase on the independents due to her quirky personality and love of cosplay; she wrestles wearing costumes of pop culture characters and superheroes, including Spider-Man and Captain Jack Sparrow. She is best known for her work in promotions such as SHIMMER, SHINE and WSU.

Bates is an Orlando local and was trained at the Team 3D Academy under current TNA star, Bully Ray, which could explain how she got the part. She has previously tried out for the company — she and Isis the Amazon competed in a tryout dark match last year.