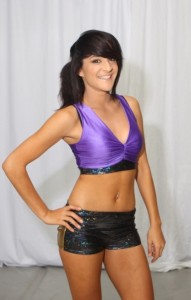 Recently announced for the huge PWWA return show taking place on September 3rd at the Liverpool Masonic Center in Sydney, New Zealander Evie is one up-and-comer to keep your eye on.

Evie began training in mid-2007 at eighteen years of age, debuting six months later for Impact Pro Wrestling New Zealand as a cheerleader. A twelve year athletic background in track & field and cross country helping make the rough transition into the professional wrestling world a little easier. Her first official match was in December of that year, in an inter-gender tag match against another IPW female soon to make the trans-Tasman trek for PWWA, Britenay. Together, the two helped to not only revive the stagnant women’s division in IPW, but it could be argued that their almost year long feud in 2008 did the same of New Zealand women’s wrestling in general.

In May 2010, Evie shed her cheerleader attire and gimmick, and began teaming up with fellow wrestler Megan-Kate, forming the popular tag-team called “BFF”. Megan-Kate’s technical style meshed well with Evie’s hard-hitting demeanor, making for an ideal combination inside the ring.

Evie lists her accomplishments as claiming the Best Female Wrestler in New Zealand award at the NZPWI‘s People’s Choice Awards in 2009 (and managing a close second for 2010!), as well as winning the biggest women’s wrestling match in New Zealand – a battle royal between all major female wrestlers in the country (which took place in December 2010).

Although IPW doesn’t yet feature a women’s title, Evie knows that she has to keep herself in the picture for when one finally eventuates. She is also hopeful to travel and wrestle overseas, to gain more experience and knowledge in-ring.

Now currently trained by the Dudley Boys’ 3D Academy graduate Dave Deluxeo, Evie’s move-set consists of hard strikes like the Yakuza kick and agile moves like the hurricanrana. She finishes off her opponents with the use of a Go-To-Sleep (cutely titled “TTYL”) or a Cattle Mutilation.

Outside of wrestling, Evie lists her interests as maintaining a healthy and active lifestyle, watching the rugby, and spending time with friends and family. She also boasts a Bachelor in Graphic Design.

Fans will be able to see Evie in action in Australia on September 3rd at the PWWA show in Sydney. The show will feature SHIMMER’s first international title match between Eagles, McKay and Canada’s Nicole Matthews. Joining Evie from New Zealand will be the aforementioned Megan-Kate and Britenay, and the recently announced J.P.E (Just Plain Evil).

** Are you an independent female wrestler looking for exposure? We’re looking to highlight new talent in an ‘indy spotlight’ weekly feature. If you’re interested in getting your name out there to over one million visitors, email us at [email protected]. We look forward to hearing from you! **