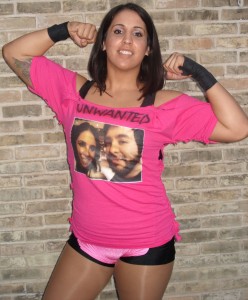 At River City Wrestling‘s next event on August 6th, the RCW International Championship will be on the line in a fatal four-way match. One of the wrestlers looking to take that title home with them is our next Indy Spotlight wrestler: Reyna Pink.

Pink has been making quite a name for herself on the Texas wrestling scene. Teamed up with Joey Spector in the recently disbanded stable ‘San Antonio’s Most Unwanted’, Pink has had her fair share of run-ins with former TNA Knockout Alissa Flash and her tag team partner Darci Drake as of late.

Not content with solely wrestling on the Texas wrestling scene, Reyna took her talents over the border to Mexico, adopting a new masked persona solely known as PINK. Working for Mexican promotions such as LLU and CMLL, Reyna got to test her skills against La Chalaca and luchadora legend, Princess Sugey.

Reyna has an interesting mix of moves ranging from the acrobatic lucha style to the more ground-based American style. Reyna has been known to use her flashy Gringa Killer DDT, as well as the Texas Cloverleaf to put away her opponents. She’s even adopted the Flying Burrito (Flying Forearm Strike) as a nod to her trainer Manny Fernandez. Now under the tutelage of Impact Wrestling star, Hernandez, and former WWE Superstar, Sho Funaki, Reyna is looking to take her in-ring game to the next level, adding more lucha style wrestling to her repertoire to reach the level of stardom attained by fellow Texas Wrestling Academy graduates such as Daniel Bryan, Brian Kendrick and Paul London, just to name a few.

Fans can get a look at Reyna Pink on August 6th in San Antonio, TX as she competes against Darci Drake, Ann Dromeda and RCW International Champion, Big Dog in fatal four-way match with the RCW International Title on the line. Tickets can be purchased here.

Watch some of Reyna’s work below:

** Are you an independent female wrestler looking for exposure? We’re looking to highlight new talent in an ‘indy spotlight’ weekly feature. If you’re interested in getting your name out there to over one million visitors, email us at [email protected]. We look forward to hearing from you! **