Is It Time to Drop Jillian vs Melina? 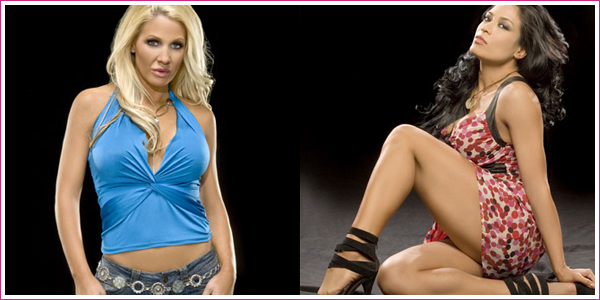 Three weeks. Three botch-filled matches. Is it time to take this one out back and shoot it in the head?

The prospect of Jillian versus Melina for the Divas Championship is mark-out material on paper; these two Divas have worked up the ranks together and until now, have never had a full-on feud for a title on WWE television. Though they worked together previously on SmackDown, it’s safe to say right now they are both at their peak. One’s a three time Women’s Champion and current Divas Champ while the other has just gotten the break of her career — she’s finally the top heel on Raw and won a title, however briefly she may have held it. On paper, this could have been a great feud.

The reality however, is far different. The three short matches these two Divas have worked together, have been for the most part, abysmal. The botches that have occured in each would be expected of the greener Divas on the same roster such as Eve, Kelly and Alicia — not two veteran Divas. In their last match alone, last week’s mixed tag match, the pair botched every spot they did.

While Jillian & Melina can’t control their circumstance, sadly it seems they’ve been lumbered with Chavo, Santino and Hornswoggle as the comic relief for the week on Raw, they can control what they do in the ring. And unfortunately, it just isn’t up to par. Part of the reason for the Diva Trade was because of botches during matches on Raw and seemingly, Jillian and Melina were given a vote of confidence to help change that — instead they’ve fallen victim to the status quo. It isn’t as though they can’t work together on live television, I thought their Judgment Day 2006 match outshone the highly regarded Trish-Mickie match at WrestleMania 22 that same year. So where is it going wrong and is it time to call it quits?

As much as we at Diva Dirt have been pushing for this feud to work out for both talented wrestlers, there’s no denying that this isn’t working. I think WWE needs to call time on this one now and move into a new programme. Sadly, it’ll be the long-underrated Jillian that gets the brunt of it, as she’ll likely move back down into a jobber spot while the Divas Champ, Melina gets a shiny new toy to play with. But they had their chance and blew it.

Melina and Alicia Fox have worked incredibly well together in the past on SmackDown and Fox has more than held her own on Raw against Mickie, Gail, Kelly and others. Therefore, that to me would be the next logical step.

Either way, I never thought I’d say this but I’m ready for Jillian and Melina to be done.

What do you think? Vote below: