Is That a Diva Getting Pyro? 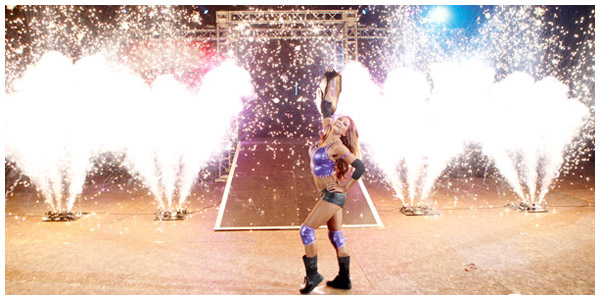 Upon flicking through some of the photos on WWE.com from the current European tour, the above photo stood out to me. Inititally because it was one of the first pictures of Eve Torres as Divas Champ since winning on Monday night, but then I looked around and noticed the spectacle surrounding Eve.

Looks like WWE is pulling out all the stops for the new Divas Champion, and I guess being highly regarded by management helps a little. I wonder if they’ll begin incorporating it into TV on Monday night? I look forward to seeing it in motion.

Rarely have the Divas been afforded such grandeur in their entrances, the only Divas I can recall getting pyro regularly are Ashley Massaro near the end of her run and Chyna.

EDIT: According to a few commenters, it’s not unusual for the Divas to have pyro in their entrances during house show loops. Luke says: “Divas like Candice Michelle, Michelle McCool, Kelly Kelly and Mickie James have had pyro like this in the past at house shows.”