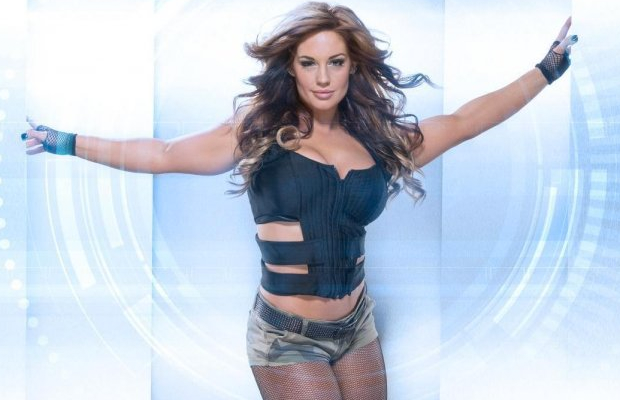 Former Diva Kaitlyn recently spoke to the Baltimore Sun about her WWE release, the current state of the Divas division and if she plans on wrestling again.

Kaitlyn, real name Celeste Bonin, is promoting her appearance this Saturday at Maryland Championship Wrestling’s Shane Shamrock Memorial Cup, which she says will be her last wrestling-related appearance for some time.

Asking for her WWE release in Baltimore: “It’s funny that this appearance is in Baltimore because I actually asked for my release in Baltimore. Actually, I also debuted there. I had a really hard travel day to get to RAW in Baltimore. There were bad storms and snow, and had a horrible day where I had to get up at 4 a.m., and then I got stuck in Miami airport, and stuck in another airport. It was truly, truly hectic. I went through all that, and finally got to RAW, and then I looked and I wasn’t even booked for the show. I got to the building, and thought ‘Hey, this is where I debuted, how cool is this?’ And it felt very right to end my WWE journey right there where it started. And it’s cool that this appearance is in Baltimore, because this is going to be my last wrestling-related appearance for a long time.”

Making the decision to retire: “When I retired, it was a bit of a last-minute decision. I had been thinking about it for a while because there was a lot of things happening in my life and it was a transitional time for me. I had just gotten engaged, and I wanted to plan my wedding. I also had this project on the backburner, with this business site, that I wanted to wait to start until I retired from WWE. When I made the decision, rather quickly, to leave the WWE, I went full throttle into making my business work, while also planning a wedding.”

Will she ever wrestle again?: “I don’t think I will ever wrestle again, but if I do, it would be for WWE. I just feel like that’s my place. It’s where I developed my wrestling abilities and character and that’s where I would stay if I was to wrestle again. The good thing about when I left is that I left on very good terms with the WWE. It left the door open for me if I ever wanted to come back. It’s not completely out of the question to ever return, whether it’s for a short-term or longer. Maybe there will be a point down the line that I miss wrestling bad enough that I’ll want to come back. As for now though, I’m just focusing on my company and my marriage and haven’t gotten that itch to wrestle.

Would she have stayed if the Divas were used then like they are now?: “That’s a really hard question. I might have stayed a little bit longer, possibly. I just reached the point where I had done a lot of cool stuff in the WWE and traveled the world and I had the title, and I think I did some really great stuff. It wasn’t a super-hard decision to step back and leave. I can’t really go back and say I would’ve stayed longer. But it’s possible. I guess it depends on what was going on at the time, especially if there were more opportunities for more storylines like there are now. But I guess what I’m saying is that I don’t regret leaving, because I love my life. I love everything that I have going on right now. It does make me happy to see all the girls really getting a chance to show their talent and abilities and personalities. It makes me proud to see that they’re getting a good opportunity.”

You can read the full interview on the Baltimore Sun.

How do you think Kaitlyn would fit into today’s Diva landscape?