Kharma No Longer with WWE? (UPDATED) 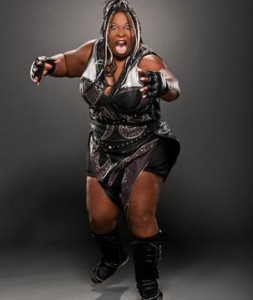 It looks as though Kharma may be gone from WWE.

After WWE’s official Twitter account moved Kharma’s profile to its ‘Alumni’ list along with a multitude of former WWE stars, including the Bella Twins, speculation began to grow on the social networking site.

Responding via Twitter, the former Awesome Kong wrote: “Getting a flood of dm’s. I guess the cat’s out of the bag.”

“Yes. I have been officially promoted to the alumni section of the WWE roster.”

Kharma, real name Kia Stevens, joined WWE in December 2010 and debuted in May of last year. Kharma announced her pregnancy in June 2011 marking a long absence from TV. After sadly announcing she had lost the baby, Kharma made a surprise appearance in January’s Royal Rumble match but a full-time return had yet to be penciled in.

While Kharma’s tweets seem to suggest she may be gone from WWE, the star has been known to playfully joke around with fans — including teasing her return on occasion. Could it be a simple case of classic Kharma trickery feeding into the WWE Twitter listing her under its ‘Alumni’? The wording of her tweet, ‘promoted to…’, could suggest so. And of course, anyone who has used Twitter knows how easy it is to mistakenly tweet/list/retweet something. At this time, there’s no confirmation of her status.