Lay-Cool & Melina: Where Do We Go from Here? 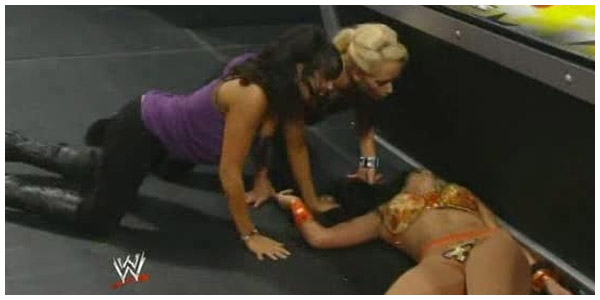 Last night’s SummerSlam pay per view is in the history books and while Steven will be reviewing the Divas match at length later, I wanted to broach the subject of Lay-Cool vs Melina, which was teased to us at the end of the Divas Championship match. Perhaps an unpopular opinion, but last night’s attack on Melina at the hands of SmackDown’s mean girls opened up a world of opportunity and to me, was the Diva equivalent of the then-NXT season one rookies hitting the ring on Raw back in June, in that now infamous ‘Tiegate’ segment.

“Why was Lay-Cool there?” “Why did they attack Melina?” Those were just some of the questions that people were asking last night. Did it all make sense? No. But then again, did that NXT invasion all make sense that Monday night in June? Answers, I expect, will come tonight and in the coming weeks on Raw and SmackDown.

For what it was, however, last night’s angle was an explosive and exciting way to begin what seems like a new cross-promotional feud between the self-professed co-Women’s Champions and the new Divas Champion. WWE quite literally kicked things off with a bang, with Michelle McCool hitting that devastating running knee into a defenceless Melina, who was propped up against the announcers’ table. Kudos to all involved, because that had me — and I suspect many of you — anticipating what would happen next.

With Melina on Raw and Lay-Cool on SmackDown, many questioned the crossover between the two brands. “Why does Lay-Cool have to get involved with everything?” But in a way, disregarding the brand division, this is pretty perfect. Melina is easily the top babyface on the entire Divas roster right now, while Lay-Cool are easily the top heels. Putting the two together seems like the makings of a feud on par with Mickie vs Lay-Cool or Beth vs Lay-Cool — perhaps even better with the Divas Title involved.

Last year, Michelle and Melina delivered some great matches together on SmackDown, feuding over the Women’s Championship. Layla, too, had some great matches with Melina on Friday nights. But it was Melina vs McCool at last July’s Night of Champions pay per view that everyone still buzzes about to this day. I am certainly not against recapturing that chemistry. And now there’s an even more interesting dynamic with the whole Lay-Cool gimmick. Michelle, at the time of her feud with Melina, was more of a silent type while Layla was a secondary player. Yet while Melina’s been away, in the past 8 months, Layla and Michelle have adopted this new mean girls persona and really made their mark on the women’s division. All three Divas now seem to be on a more even level in terms of character. That could lead to some interesting promos, backstage segments and more.

But where is it all leading? The theories:
* Is Lay-Cool after the Divas Championship so both members have a belt? That could certainly be one idea. Perhaps the attack is to set up Cool against Melina so that Lay-Cool can hold all the gold.

* Title unification? This seems to be the go-to solution. The one that most fans flock to everytime there’s interaction between the Divas and Women’s Champions. Personally, I don’t see this happening but with Night of Champions next month, perhaps we’ll see Layla vs Melina?

* Winner Takes All? If Lay-Cool wants to hold all the gold, what if they put both belts on the line in a ‘Winner Take All’ tag match? Melina would need to find herself a partner and it seems WWE may have just the right girl for her. They are obviously very high on a certain Eve Torres. Working a big storyline with Melina and Lay-Cool could give her the rub she needs. Lay-Cool vs Melina & Eve for all the gold at Night of Champions?

Wherever they go with this, I think it’s exciting to see the heavy hitters from both brands collide. Last night’s angle was really well done. Granted, the last time I was excited coming out of a pay per view was when Alicia Fox won the Divas Title back in June. I was hopeful that Fox’s title reign would be just what Raw needed to bring some excitement back to the Divas division. The very next night, she was in a mixed tag match involving The Great Khali. Talk about a comedown from the optimism from the night before. It’s just as easy to think that after getting off on the right foot last night, WWE will go in a completely underwhelming direction with Melina and Lay-Cool tonight on Raw. But with Lay-Cool and Melina involved, this could be a bigger feud than the usual fare, in which case one would expect more focus and storylining for the Divas. If so, I’d chalk that up as a ‘win’.