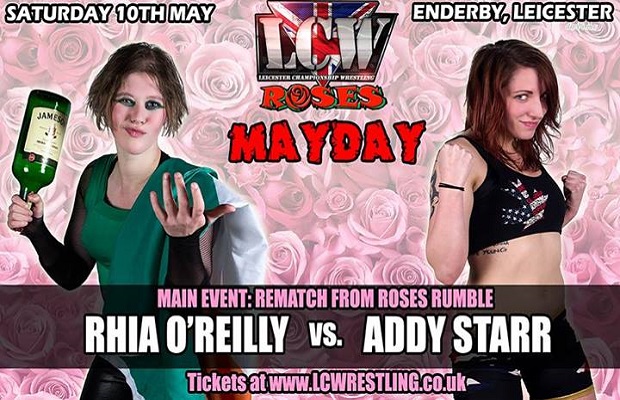 LCW Roses return to Brockington College in Leicester next Saturday for their third show, Mayday.

The main event sees “The All-American Canadian” Addy Starr and “The Fighting Irish” Rhia O’Reilly face off in a reprise of their match at the debut LCW Roses show back in January. That match ended in disqualification, so both women will be looking to gain an advantage over the other and put their feud to rest.

Also, globetrotting Scots firebrand Nikki Storm looks to build on her momentum from her big victory over “Amazon” Ayesha Ray at March’s show by taking on rising Welsh star Nixon, who herself is on a roll having defeated Leah Owens at the last LCW event. Leah will return to tag team competition for this show, doubling up with her sister Kasey to take on the recently-formed team of Shauna Shay and Violet Vendetta.

In addition, a four-way elimination match will take place between four young talents, as Princess Nadia Sapphire, Felony, Kirsty Love and Jenna go up against each other in the ring. In particular, Felony and Kirsty Love’s involvement in the match will be interesting as Kirsty is searching for answers after her friend Freya was kidnapped by Felony’s boyfriend Barricade at the previous show.

Finally, Kay Lee Ray makes her return to LCW Roses to take on Viper, while Ayesha Ray attempts to make up lost ground following her loss to Nikki Storm by taking on Faith Lehaine.

Mayday takes place next Saturday, May 10th at Brockington College in Enderby, Leicester with a bell time of 3pm, and tickets costing £8.

For more information, check out LCW Roses on Facebook.