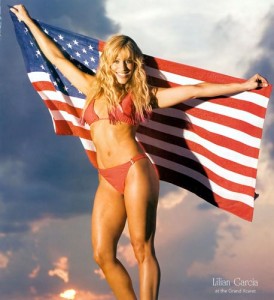 With the 10th anniversary of 9/11 this Sunday, our friends at IWantWrestling.com have gathered several former WWE employees who were with the company at the time to pay tribute and discuss what it was like being on the road with the company on that fateful day.

Amongst the interviewees is former WWE ring announcer, the Decade Diva Lilian Garcia, who as we all know, lived in New York until last year.

Lilian sang an emotional rendition of the national anthem just two days after 9/11 on a live tribute episode of SmackDown. That taping was the first public gathering in the US after 9/11.

Speaking on how she found out about the tragedy, Lilian says: “It was in the 7 o’clock hour, I got woken up and I got a phone call and it was like ‘I’m okay, I’m okay’. I was like ‘What? What’s going on?’ It was like, ‘Turn on the TV!’, so I turn on the TV. Now I’m really groggy. I have no idea what was going on. So I see the TV and I see what’s going on. The towers were still up at the time and during my conversation the towers came down and I just remember screaming at the phone, telling them what was going on, that the towers had fallen. I was just in a state of shock. I felt like I was still in a dream.”

Lilian also recalls the tribute episode of SmackDown just two days after and being asked to sing the national anthem on the show: “I do remember that Vince came up to me and asked me to sing the national anthem. I’ll never forget that. […] It was a great honor. It was scary for me too. I knew it was going to be very emotional for me. I was hoping that I could get through it, and I did.”

Garcia continues: “It was a lot on my shoulders, yet I knew that I felt like everything leading up to it and all these times I was able to sing the national anthem before then were… they prepared me for that. I remember just being nervous and being overwhelmed in a way. […] I knew I had to keep it together and just go out and do it because it was going to be a huge, huge moment in all of our lives. […] I’ll never forget standing in the middle of that ring and looking over to the side and seeing all of the WWE Superstars and employees on that ramp. It was just this feeling… I feel like it was yesterday.”

Lilian also returned to WWE Monday Night Raw earlier this year to sing the national anthem once again the night after it was announced that Osama Bin Laden had been captured. Lilian talks about that performance in an interview with Diva Dirt which you can listen to here.