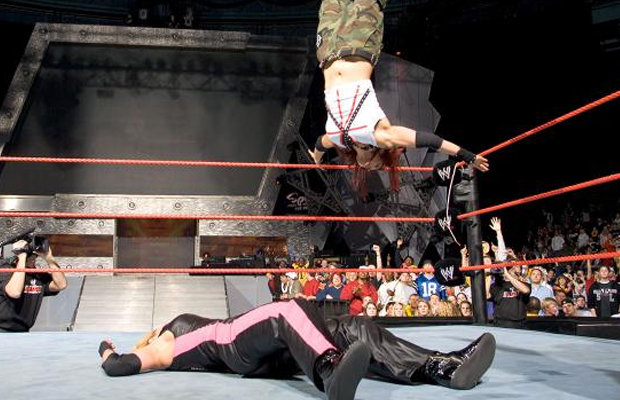 “The Nights Amy Ruled the World” by Philip27

In the 21-year history of Monday Night Raw, some of the greatest names in WWE history have been involved in main-event segments & matches. From Bret Hart to Shawn Michaels, from The Undertaker to Stone Cold, from The Rock to Triple H, and from John Cena to Randy Orton, numerous Hall of Famers and all-time greats have had this honor. And among them, one woman who, in her 7-year WWE career, main-evented Raw, not once, but twice (not counting her involvements in the Edge/Cena feud in 2006)!!! Her name: Amy “Lita” Dumas.

The first time; August 21st, 2000, the RAW before Summerslam 2000, from Lafayette, LA. The main-event? A Women’s Championship match, Lita vs the defending champion Stephanie McMahon-Helmsley!!! Everyone thought: “Wait, what??? Two women main eventing Raw is War??? This is unheard of!!!”… Well duh, yes it was!!! Granted, the match was somewhat lost in the shuffle that was the (then) WWF Championship feud between The Rock (who was the guest referee in this match), Triple H & Kurt Angle… And yeah, each one of these men (along with the Hardy Boyz) got involved in it… But I’ll never forget the moment, when the Rock, after hitting Stephanie with a spinebuster, looked at Lita, and told her to fly… and Lita went to the top, and the crowd rose to their feet… and one moonsault later, we had a new champion!!! Who would have known at that point, that this moment would be the first step in a Hall of Fame career?

But then, it happened again!!! The time? December 6th, 2004. The place? Charlotte, NC. The main event? A Women’s Championship match once again!!! And guess who was involved once again… Lita!!! This time, she was challenging Trish Stratus, the devious champion of six months… the woman who had mocked her for weeks, after Lita suffered the loss of her baby son with Kane. And this time, outside of the referee, no man was near ringside!!! This was the first (and ONLY) time that two women main evented RAW BY THEMSELVES!!! No run-ins, no outside interference, no special referee shenanigans… Just two women who hated each other, fighting for the greatest prize of their careers!!! And to cap it off, even before the match started, Lita giving the “Kiss of Death” to Trish backstage!!! Just a small glimpse into the future…

Many have called it the greatest women’s match in WWE history!!! I don’t know if I’d go that far (I preferred their match at Unforgiven 2006), but without a doubt, it was the greatest moment in women’s wrestling!!! Two of the greatest of all-time, both Hall of Famers (and absolutely deserving), doing battle in the main event of Monday Night Raw… And from bell to bell, they put their bodies on the line!!! Suicide dives, sleepers, superplexes, powerbombs… And then, lightning strikes again!!! From the same corner as 4 years earlier in Lafayette, Lita would take off… and a moonsault & 3 seconds later, we had a new champion!!! Lita had done it again!!! Within 4 years, she had won the Women’s Championship twice in the MAIN EVENT of Monday Night Raw!!! Alas, her 2nd reign would be a short-lived one (thanks to a torn ACL one month later), but it gave us a moment to remember for the rest of our lives!!!

All in all, Amy “Lita” Dumas gave us some unforgettable moments in her 7-year career. From fighting against men like Dean Malenko and John Cena, to her involvement in TLC matches, and from her memorable return from a broken neck in 2003, to her weddings with Kane and Edge… But in my heart, the heart of a huge Lita fan, two moments stand out… Two moments, and two nights… the nights that a young girl was dreaming about… and years later, she’d realize they were true!!! Two nights, when a young woman would overshadow the legends of her era!!! Two nights, when Lita went from fan-favorite, to LEGEND!!!