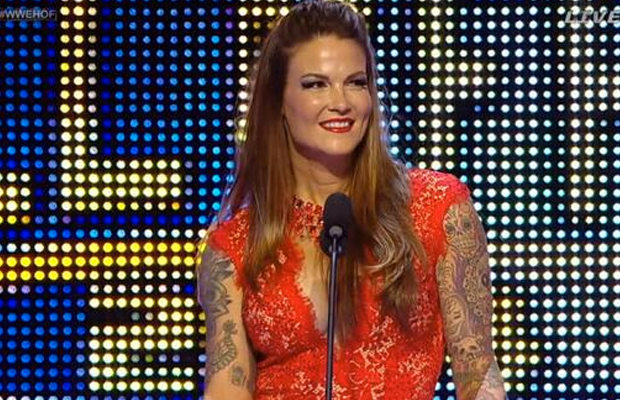 Tonight, Lita became the latest woman inducted into the WWE Hall of Fame.

The four-time Women’s Champion was introduced by Trish Stratus, who praised their feuds and partnerships, likening introducing Lita to being her maid of honor. Trish, who was inducted into the Hall of Fame last year, also revealed that Lita is godmother to her son Max.

In her speech, Lita spoke of starting out in Mexico, accidentally purchasing a ticket to a circus in her attempt to attend her first lucha libre show.

She covered many facets of her WWE career, thanking the likes of Trish, Victoria and Mickie James for having memorable matches with her. She called her enduring friendship with Trish the proudest achievement in her career.

In wrapping up her speech, Lita credited the punk rock scene for teaching her that she could do whatever she wanted, turning her into the barrier-breaking woman she is today.

You can watch Lita’s speech in full on the WWE Network.

What did you think of Lita’s speech?