The WWE-proclaimed ‘Original Diva’, Sunny will be inducted into the Hall of Fame tonight at Atlanta, GA. Diva Dirt’s Cryssi is on hand and will be bringing us live updates. 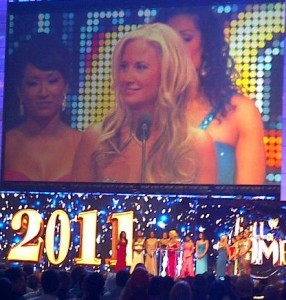 * Sunny is the third inductee.

* King, the host of the show, says Sunny always got what she wanted.

* Video package for Sunny plays. Lots of cheers and whistles from the crowd.

* King says the Divas are ‘smart, sexy, powerful and stuck up…’ Lay-Cool and the other Divas take the stage.

* Michelle says tonight isn’t about Lay-Cool. Layla puts Sunny over saying if it wasn’t for her, there wouldn’t be any Divas.

* Lay-Cool say she is groundbreaking and the original Diva.

* Lay-Cool ‘really putting over Sunny’ says Cryssi. They say it may have taken 20 minutes to download her pictures back in the day but it was worth it.

* Sunny takes the stage and says, “Look at what I started!”

* Sunny talks about how when she grew up she was a fan of wrestling but once puberty hit she was over it.

* She says she followed her high school boyfriend, Chris Candido, to Smoky Mountain Wrestling. Jim Cornette told her he needed a girl and ‘that was it’. She was only supposed to be there for six months.

* She auditioned for WWE in 1994. She says it was the worst audition ever & she didn’t even know what the teleprompter was.

* Sunny says they threw everything at her: slop, bikinis, managing, the Slammy Awards etc.

* Sunny says there has always been debate about who is the original Diva but tonight that debate has been put to rest.

* She now pays tribute to the other inductees tonight.

* She thanks Jan the make-up artist, Jill the hairstylist, JR and King for always being there for her and all the Divas.

* She thanks her boyfriend John for ‘getting her back on track’.

* She thanks her dad, the WWE and the fans. She says without the fans, no one would be there.

* She says she’s so honored & reminds everyone that she is officially the youngest inductee ever.

* Sunny wraps up by saying she’s not too old for one more run and ‘what Sunny wants, Sunny gets’.

* From Cryssi: “She played the crowd, hugged the Divas and gt everyone on their feet. She owned it.”

The Hall of Fame ceremony will air on Monday at 8pm ET on USA Network.