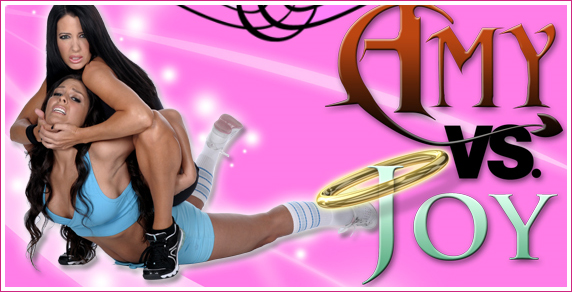 I don’t know about you guys, but today is shaping up to be ROFLtastic. Between Jimmy Hart’s Wrestlicious and this, it’s either a dark day for women’s wrestling or if you’re like me and Erin, you take some perverse pleasure in it all.

Former Diva Search rejects, Amy Weber and Joy Giovanni have resorted to making a pseudo-fetish wrestling DVD, entitled Amy vs Joy. The pair were part of the 2004 Diva Search which was eventually won by Christy Hemme. However soon after the Search was over, the pair, along with the real winners of that particular season – Maria and Michelle McCool – were signed up by WWE. Both eventually left the company in 2005.

Looks like the recession has hit these two hard as they resort to selling themselves on DVD. You can check out the official website for what I’m sure will be a hotly in-demand event, by clicking here.

It’s funny how time flies! I remember like yesterday, these two ‘tards making fools of themselves on national television in the ‘Diss the Diva’ contest. The out-and-out bullying of Carmella DeCesare was cruel but I guess she’s got the last laugh since she’s now married to an NFL linebacker and in the money?

Then there’s the comparisons to the likes of Christy, Maria and Michelle. Of the lot, I would say Michelle is the true winner of the Class of 2004. She’s managed to shake her ‘Diva Search’ tag and is doing big things in WWE.