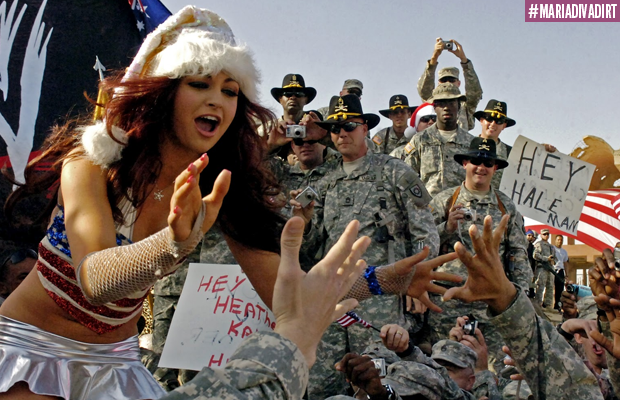 Diva Dirt is pleased to have former WWE Diva and the First Lady of Ring of Honor as a columnist. Stay tuned for new blogs from Maria.

What’s up all you Stars and Studs!!

Life after World Wresting Entertainment. Instantly, most fans think of failure. Fans think of the death. Fans think of careers being over. It’s sad that some fans don’t realize for a lot of wrestlers LIFE begins after wrestling. WWE is a rough road. Four to five days on the road and two to three days off. Two days in your own bed, just think of that for a moment. Snuggling with your favorite Spongebob pillow in your comfy GI Joe PJs and eating Biancci’s pizza in bed only to jump on a plane and out of your warm home cocoon. Maybe, eight days in a month will be spent with the people, pets, and things you love outside of wrestling.

It’s amazing when the wild ride is happening, don’t get me wrong, but it is a Wonderland. Once you fall down that rabbit hole, time no longer exists. It’s an endless cycle of shows, travel, laundry tanner, gym, travel, shows, etc etc etc… You can’t have much of a LIFE while on the road that much. Most fans believe that my life is over after the WWE, but it isn’t. I still am at wrestling shows almost every weekend. I am going to school full time. I did two films this year, Army of the Damned and A Bet’s a Bet. Army of the Damned will be out later this year. I was a host for King of the Cage on HDNET, Code Red DVDs and Afterbuzztv.com. I learned to sword fight while doing a fight for fantasywomenbattles.com. I recorded music. I’m a spokesperson for paythefan.com. I am planning my wedding!! I am currently on TV for Ring of Honor wrestling. But, none of that matters to the WWE wrestling fan if you aren’t on WWE TV.

I often wonder why that is. Do fans just want you to fail after WWE? Are fans not really a fan of the person but of the company? Do some fans want your life to be over because they don’t want to think of you doing anything else? I get asked everyday when are you going back? Don’t you miss WWE? I tried to go back, I sent my EPK to WWE, but they decided to not move forward with the storyline. Politics at WWE is a two-faced blessing and I am thankful to be working at Ring Of Honor. (I’ve almost been there for 2 years!!) I’m now happy to be moving forward with my life but I feel as if WWE fans aren’t ready for me to do so. They want to hear more about the Bella twins debacle. They want me to insult the girls that are on Total Divas. But, the truth is I have a lot more on my plate that what those chicks are up to or the happenings at WWE. Also, I don’t stay angry for that long. It’s bad karma and there are too many beautiful, positive people in my life to worry about the people that hurt me.

I don’t know what the answer is to make people understand my main goal in life has nothing to do with twins or to make people understand LIFE is good even without WWE. I will tell you this: when fans tell me I failed, it saddens me. I am sure that so many former WWE wrestlers feel this exact way. Because our lives aren’t over. I’m not dead. And I most certainly am not a failure. What is so great about WWE? The fame? The money? Or the traveling around the world? I guess all of it is great but to me it was just five and a half years. To me it was not the greatest or the worst experience in my life. I’ve lived for 25 and a half years without WWE and I would like to live at least 70 more. So, in the grand scheme of things my time at WWE is just a fabliau in my life and to ruminate on it is to live in verisimilitude.

So, many of my wrestling friends are starting to move forward as well, getting the dreaded “real” job, going back to school, having kids, and getting married. Some are still in wrestling and wrestling on the independent circuit. Most former wrestlers get to a point when it is time to move forward and become part of society. It’s scary and for the most part it is unexciting which is so far from what wrestlers are used to. BUT, there is a certain glow that emanates from wrestlers after WWE because it’s almost like you have survived a run in with the evil Queen and you still kept your head. I have shed a lot of tears this year, especially in February when my contract from WWE got pulled, for my old life as a Diva. It hurt and I felt like my life was over but I quickly learned that I still have so much left to offer. So, I picked myself up out of my puddle of useless tears and got to work. I am studying film and hope to make a transition to one day be behind the scenes, in wrestling. My road with the WWE may be over, but I still have a lot of road in my journey in LIFE.

Yes, this entire blog is a contradiction because on one hand all entertainers want to be in front of the massive crowds, but on the other hand, submitting to the political landscape of any major corporation such as WWE is draining. What I have concluded from this intense feeling of hypocrisy is that it is best to love what is good for us and not just what is only in Wonderland. WWE will always have a special place in my red heart but luckily I have a lot more space in my heart for LIFE.

Catch me on Ring of Honor: rohwrestling.com.