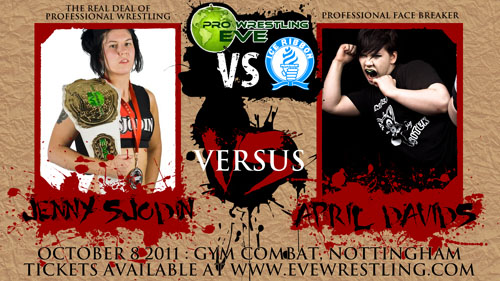 Pro-Wrestling: EVE has announced several matches for its EVE vs Ice Ribbon shows on October 8th and 9th.

We will be featuring EVE’s Dann & Emily Read in our Promoters Season interview this week where two more matches will be exclusively announced so stay tuned.

Additionally, EVE filmed an angle last weekend that set up the Rhia/Janey match when Rhia turned heel. More information and video below:

[notice]This past Saturday Pro-Wrestling:EVE presented a special guest match at the Southside Wrestling Entertainment event in Huntingdon, Cambs between fan favourites Rhia O’Reilly and Super Janey B.
EVE’s resident super hero was in control through the early portion of the match using her lucha libre style to throw “The Fightin’ Irish” off her game although it was one hurricanrana too many as Rhia countered the move with a vicious drop-down powerbomb that brought a shocked gasp from the sell out crowd. However, despite the viciousness and impact of the move it was not enough to put Super Janey B away much to the surprise of not just the fans in attendance but also to Rhia herself. O’Reilly would continue to use more power based moves in an attempt to keep Super Janey B down for the 3 count however no matter what moves she executed she simply could not find the kryptonite to achieve her goal and as the match went on Rhia’s frustration brought her temper to boiling point. With a record of 2 wins and 7 losses going into this match Rhia was desperate for a win and celebrated as such when she believed to have won the match following what she believed to be a 3 count from the referee, however what O’Reilly had not seen was Janey place her foot on the bottom rope moments before the 3 count and thus the match had not ended at all. When Rhia finally realised what had happened she had given her opponent too much time to recover and Super Janey B was able to counter a back breaker attempt into La Mistica for the submission victory taking Rhia’s Win/Loss Record to 2 Wins & 8 Losses. Following the match Rhia argued with the referee, attempted to get in the face of Super Janey and began hurling abuse at anyone within earshot much to the surprise of everyone who had known her, but it was what happened following the match that truly shocked people.
As EVE commentator Fred Emerson attempted to catch up with the elusive super hero of Pro-Wrestling:EVE these were the scenes that were captured on camera…..[/notice]

Pick up tickets for EVE on October 8th and 9th here.