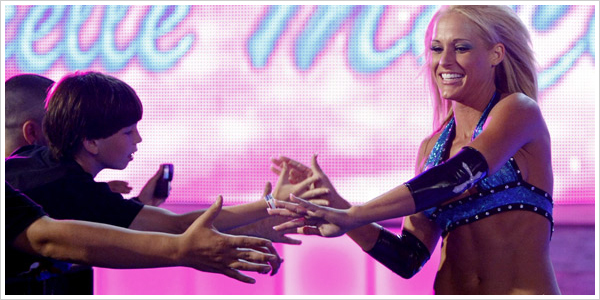 Last night, she became the first ever Divas Champion but today, me thinks she is about to become a hate figure among women’s wrestling fans everywhere as many sites report that Michelle McCool has taken it upon herself to become something of a “locker room leader” among the Divas. Did you just scoff reading that? Because I think I heard about a few thousand scoffs…

That’s right, not Victoria, not Mickie James… but Michelle McCool has put herself in charge of the women’s division in the WWE. It seems that our new Divas Champion is a modern day Anne Boleyn, using her position of prominence as the Henry VIII’s Undertaker’s girlfriend to exert her own authority. Now, I know many of you reading this will no doubt want to question the relationship between these two but let’s face it, it’s common knowledge therefore I reject all “Where’s the proof?” comments.

Reports suggest that Michelle is acting to the Divas, what ‘Taker is to the Superstars – a locker room leader. Michelle is apparently trying to mould the women’s division and has rubbed others the wrong way, i.e. that news story regarding Michelle trying to teach Natalya the correct way to wrestle. However, some of our other Divas aren’t too pleased though they dare not say it to Michelle’s face (after all she has the ear of Mr ‘Taker and our girls wouldn’t want to find themselves on the unemployment line), they have aired their displease as Michelle is hardly a tenured Diva. It seems the All-American Girl knows how to play the game, because aside from Stephanie McMahon she is fast becoming the most influential woman in the WWE.

What’s your take on this news? Do you call bullshit? Sound off in the comments!