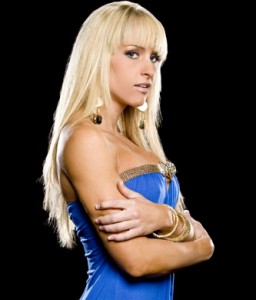 Former WWE Diva Michelle McCool has opened up on a slew of topics in the second part of her audio memoirs at her official website, MichelleMcCool.net.

In part two, Michelle reveals that she contemplated retirement for a year before she left this past April at Extreme Rules.

I’ve contemplated retiring, having my final match, for a long time. I mean, over a year. It was kinda like, gosh this is getting so stressful, I’m kinda compromising who I am as a person because of certain situations, and constant stress from these situations. That’s not the type of person I am so for quite some time I was battling with the idea of ‘How much longer can I do this? Mentally, physically, emotionally… had the time come?’ I could never get a clear grasp on whether or not my time had come. I could never get a definitive of feeling of, ‘Yes, you know what, I’m done’. Towards the latter part of 2010, I started thinking, ‘Let’s see what they’re gonna do for WrestleMania. Let’s see what direction they want to go with LayCool. Let’s just give it a little bit more time’, but I found myself beginning to week after week, not look forward to going to work as much as I should have, as much as I used to in the past and I started getting a bad taste in my mouth for a business that I absolutely love with all my heart. I didn’t want to get to a point of anger or resentment. I didn’t want to get to this point where I hated this business that I loved so much and I wasn’t going to allow myself to get to that point.

So towards the beginning of 2011, I battled back and forth with the idea and spoke to several different people and God bless them, like I said before, they were so supportive. […] I battled with it for over a year, but I think it was around February that I made the decision. I didn’t tell anybody except Layla and Vickie that I’d made the decision. Vince and I spoke about it. I spoke about it with a few other people. I made the decision and from that point on it was just like, ‘Alright, this is it, what can we do? How can we do it?’ No looking back. […] Once I made the decision, I stood by that decision. I knew this was what’s right. This is what’s going to make Michelle McCool happy outside the ring. This is what’s going to make her love this business that she absolutely adores. Once I made the decision, that was it. I know it was a tough decision, but it was the right decision for my mind, for my body, for my soul.

Michelle also comments on her final match in WWE and the break-up of LayCool with her best friend, Layla.

When I saw that Extreme Rules was in Florida, it was just kind of like, there’s the tell-tale sign. All my family and friends can come watch me close to home. I’d like to go out in Florida. There’s nobody else I’d like to have gone out with other than Layla. I mean, that’s it. I just wouldn’t want to go out any other way. I think I owed her that. I think she deserves it. I think she’s not given near enough credit as people give her. […] There’s no way I wouldn’t have wanted to do everything I could possibly do for her on my way out. We felt the best way was ‘Loser Leaves’.

The coolest thing was when I came backstage, and this just puts the stamp on your whole career… I came back through the curtain and first and foremost was Layla, who I think I ran into, she was so close to the curtain. We were hugging, we were crying, and thanking each other. It was just a very emotional moment. Everybody was just standing up there clapping. [I was] thanking Vince, thanking the agents, thanking the writers. Fit Finlay, he’s the one person that wasn’t there that I wish was there.

When I walked down the stairs leaving gorilla, the entire roster was lined alongside the sides of the curtains standing up and clapping. I think that’s the utmost respect someone could ever ask for. That moment captured it all – having all of my co-workers, all of my colleagues, sitting there telling me how much they appreciate me, and what I’ve done, and thanking me. It was a tough moment. I don’t like to show my emotions to a lot of people, so as I was hugging people, I was trying to wipe my tears off at the same time.

Speaking on cattiness in the Divas locker room and how it affected her decision to retire, Michelle says:

Is there cattiness and drama backstage? And clawing and everything that goes on with girls? Yes, absolutely, 100% – no denying the drama backstage. Then again, drama is everywhere. Did I leave for the sole reason that there was drama and cattiness backstage? Absolutely not. Did it drive me crazy and make me want to pull my hair out some days? Absolutely, yes. But the decision to leave was a personal decision that I made for myself.

The first ever Divas Champion also comments on whether she’d return:

To me, retirement means retirement. Retirement doesn’t mean, ‘Hey, I’ll be back in a few months, I’m just taking a hiatus’. […] So am I on a long hiatus? Yes. I’m on a very, very long hiatus called retirement.

I used to absolutely hate when people would ask somebody who was retired from the business, ‘Come on, are you gonna come back?’ and they’d always, ‘Never say never’. I’d always be like, that’s not an answer. It’s not that difficult – yes or no. Now that I’m getting that question, I’m saying never say never!

Once again, another very insightful listen. Check out the full audio here.