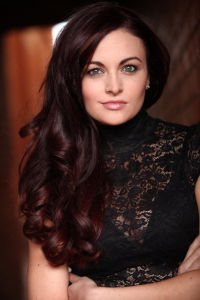 [notice]CODE RED is proud to announce that a TV superstar will be the hostess for our new exclusive horror line! Former WWE superstar, 2009 Diva of the Year, Celebrity Apprentice contestant, Singing sensation, and April 2008 Playboy cover girl MARIA KANELLIS is back for more! Maria will host Code Red’s MARIA’S B MOVIE MAYHEM, and the first round of her horror/exploitation DVD releases will street in September! Maria will bring you the gory horror cult classic MARDI GRAS MASSACRE, the Native American horror flick HAUNTED with Aldo Ray, and Double-bills of SCREAM / BARN OF THE NAKED DEAD and LOVE ME DEADLY / CURIOUS CASE OF THE CAMPUS CORPSE. Then, on 9 more releases, Maria will host many other exploitation films including NIGHT OF THE DEMON, VAMPIRE AT MIDNIGHT, CAGED MEN, VOODOO DOLLS/MADONNA: CASE OF BLOOD AMBITION, RIOT ON 42ND STREET/BAD GIRLS DORMITORY, TEENAGE HITCHHIKERS/TEENAGE TRAMP, and more! All will feature Maria introducing the film, and appearing again after the film is over. The films will all be uninterrupted and uncut. Some of the DVDs will feature extras, as well.[/notice]

They also say that “Maria is a great gal and she had a lot of fun hosting this upcoming DVD series. Many wrestling fans are also horror fans so hopefully this can turn many wrestling fans onto CODE RED product. Having one of the most popular former WWE divas hosting our films is truly an honor.”

In addition to a public service announcement from Maria promoting the series (see below), CODE RED’s blog has also uploaded some behind the scenes shots of her, as well as DVD cover art.