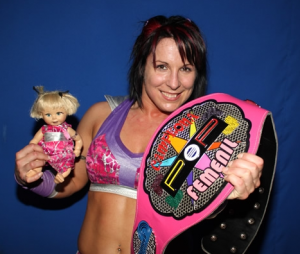 In one of her first matches in about four months, LuFisto won the vacant LuchaPOP Femenil Title on February 19. She defeated La Vaquerita in singles action on the DDD/X-Project show.

Sexy Star was originally scheduled to be her opponent for the match, so one might assume that the two will probably face off at some point in the future.

On the VO/X-Project show, also held at the Arena Lopez Monterrey on February 19, Vanely and Yuki Star beat Big Mama and La Felina.

Over in Japan on the same date, for SMASH.25, Syuri defeated Kana to become the new SMASH Divas Champion. She is the third ever champion (with the others being Tomoka Nakagawa and Kana, the latter of whom has two reigns under her belt) – and may possibly be the last, with SMASH’s last show to take place on March 14. 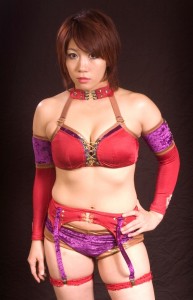 Speaking of Kana, it’s recently been announced that she’ll be returning to the United States in just a few short weeks for the upcoming SHIMMER tapings on March 17 and 18.

The joshi star made quite the impression at the last set of tapings (volumes 41-44) in October 2011. She was all business upon her arrival in Chicago, showing everyone there that she was not in SHIMMER to make friends, but rather to prove her worthiness as a wrestler inside the ring. Kana even went as far as to refuse handshakes with some of SHIMMER’s top wrestlers.

She then went on to wrestle in well-received matches against the likes of Cheerleader Melissa, Sara Del Rey, Mia Yim and LuFisto.

The weekend after SHIMMER, on October 7, she made her debut for CHIKARA at their “Small But Mighty” event in North Carolina against “Everybody’s Favourite Girlfriend” Jessie McKay. The very next day, on October 8, she and Del Rey wrestled in CHIKARA’s main event spot at their “Klunk in Love” show in Tennessee.

Anarchy Championship Wrestling presented “The Show Goes On…” at Hooligan’s in Live Oak, TX on February 19, and quite a few women appeared on said show.

MsChif will take on Mena Libra on Friday for AAW Pro Wrestling’s “Path of Redemption” in a Falls Count Anywhere Match.

The likes of former WWE Divas Jillian Hall and Melina have been added to the list of talent announced for the shows.

How I Met Your Mother’s Barney Stinson would definitely be impressed with Stacy Keibler‘s clothing choice on February 20 at the 20th Anniversary party for Vanity Fair‘s “Vanities” held at Hollywood’s Siren Studios.

Keibler “suited up” in a cute Zara ensemble, and mingled with various other celebrities at the event.