You bring the coffee, we’ll bring the news! This is Diva Dirt’s news in brief, giving you the 411 on some of the little news items from the past couple of days. Let’s delve in, shall we?

* Bad break for Pro-Wrestling: EVE and Ice Ribbon as the venue they were going to hold their joint event later this year is no longer an option. The companies had teamed with 1PW to put on two shows on October 8th and 9th only to have the 1PW cancel its entire shows.

EVE posted on their Twitter page that they are now looking for a new venue for EVE vs Ice Ribbon:

Statement coming later on but due to 1PW cancelling their upcoming shows on Oct 8 & 9 we are being forced to change the venue for our events. Going through pros and cons in which back up venue to go with. Soon as we’ve made a decision we’ll let you know :-)

We’ll keep you updated on the new venue.

* Will Melina go dancing? The A-List Diva’s fanbase has been staunchly pushing ABC to add Melina to the cast for the next season of Dancing with the Stars. Each season, ABC takes suggestions from viewers of the show via its official website. Melina’s fans came out in full force, launching a Twitter petition and suggesting her on ABC.com.

Other women in wrestling lobbying to hit the ballroom are Velvet Sky, Shelly Martinez and Jackie Moore.

If you want to see any of those ladies on the show, you can suggest them here.

Well, Melina does have some time on her hands so she could be a good choice for the show when it launches in September. On fans lobbying for her to join the show, Melina wrote:

I hope I can make u all proud. I’m going to keep going. Even if I don’t get DWTS, there will b a next time. As for wrestling I’m not done yet! 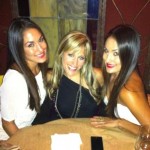 * We love a happy reunion here at Diva Dirt. They make us all teary-eyed as we rush to YouTube to celebrate the good ol’ days. The latest Divas reunited? Lilian Garcia and the Bella Twins.

All together now… aw!

Check out pictures of the trio at Lilian’s Twitter page.

* There’s a new TNA Spin Cycle on YouTube featuring Angelina Love and Mickie James. It’s in two parts. Part one was released last week and part two this week. Watch both parts below:

* Today’s Diva Dirt Woman of the Day is Naomi. Hayyyy!

That’s the scoop for now. Which News in Brief items tickled your tastebuds? Let us know in the comments!

You can also submit your news tips to us for inclusion in News Brief at this link.