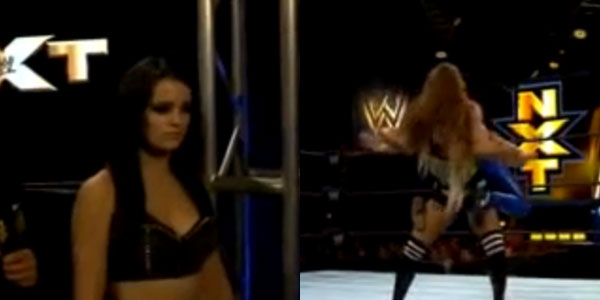 Yee haw, and welcome to this week’s NXT Watch. I’m deathly tired right now since the episode did not leak Thursday morning like I anticipated, but nonetheless, I am here to do some recapping so some recapping I shall do. This week on NXT, perhaps the most notorious FCW Divas rivalry of the past year resurfaces, as Raquel Diaz squares off against Audrey Marie. Will Audrey be the next victim in her “Exfoliating Ugliness” Tour? Or will Audrey Marie, more commonly known as equal to me what Dolph Ziggler is to Cryssi, debut with a victory? And what does our sinister Brit, Paige have to say about all of this?! There’s only one way to find out, so scroll down your mouse in three… two… one. Go!

We are treated to a match graphic of Raquel and my Country Queen, Audrey Marie. After the break, we return to some new hoedown music and clips of Audrey posing with some cowgirl beltbuckle nameplate. Oh wow, maybe they’re going to turn Audrey back into the cowgirl she debuted as talking about grandma’s and cows. Well, if they are then Audrey didn’t get the memo because she looks nothing like a cowgirl tonight. Va va voom! Audrey walks out and I immediately become enraged with the crowd for not giving her a standing ovation. She steps into the ring as it’s mentioned that she’s a certified accountant… and thus the days begin until Audrey’s three facts of doom present themselves to a nearby commentary table every single time she steps into the ring.

After some tremendous standing in the ring, out comes “Guess whooooo”, Raquel Diaz. She lets out a cackle and claims that Audrey doesn’t know how to work a ramp, which I take great offense to because the Country Queen did a fine job. Diaz calls her a mamacita and fixes her hair in the camera lens, before stepping into the ring and letting us know that the Exfoliating Ugliness Tour commences… now. Audrey makes a great face to the camera as the bell sounds and we kick things off with Raquel vs. Audrey for the billionth time.

They lock up and Audrey applies a headlock that she keeps maintained for a good long while despite Raquel trying to fight out. Finally Diaz fights out and drops Audrey on the ropes in a pretty nasty way. She only gains a two count, as Raquel applies some form of submission move. Diaz slams Audrey into the canvas and stomps on her head, before continuing this dismantling of Audrey. Marie finally shows some signs of life, as Raquel drops her with a type of drop toe hold. Diaz then goes off on Audrey, before Marie flips over into a jackknife. They bridge around before Audrey flips out. She goes for a kick, but misses and Raquel spanks her on the butt. From there, the crowd doesn’t seem to be on the side of Raquel to put it lightly, as she plants Audrey with the Gory Bomb for the win. After the match, Diaz paints the letter “L” on Audrey’s forehead with her lipstick, before we head to the back where Briley Pierce asks Paige about Raquel’s “tour”. Paige simply says “Raquel Diaz… Ugliness Tour… We’ll see”. Interesting!~

Thoughts: I’m pretty iffy on the segment/match overall. While I’m not the biggest fan of this new NXT, it’s somewhat improving from where it was when it started. Now it’s sort of hit or miss and just “there.” I liked that both got entrances, the match didn’t feel ridiculously short, and we even got some mic time with Raquel and Paige. I didn’t really care for the match in itself though, but I’ve seen them face off I feel a hundred times so it’s kind of entered that territory where I can’t pay attention to anything (aside from Audrey).

In terms of Raquel, I enjoy her mic work. Her persona is interesting to say the least, but at least it’s different I guess. That’s where I feel Audrey falls behind unfortunately. I clearly love Audrey, and I think she has that natural look to become a crowd pleaser without even needing to have an over the top character, but she still needs something to make her spark. She’s just sort of there with no identity. I feel that’s why a lot of fans don’t draw to her as easily as some of the other Divas because she’s just sort of smiley and happy go lucky. I don’t think Audrey is that bad in the ring though. To be honest, I think she’s a lot better than Raquel, but strictly being a wrestler with no identity is pretty hard to do on a main roster ala Gail Kim‘s WWE run. I liked the random face Audrey made during Raquel’s entrance though, and I feel that she’s working hard to improve her game… but without chances to showcase who she is aside from bubbly and smiley, there’s not much that can help fans connect with her since her look somehow doesn’t win them all over like it does me.

Raquel is sort of the opposite for me. I think she has personality and it’s easy for fans to dislike her when she cuts a promo. In ring wise, I’m not really a fan. But personally, I’ve never held the belief that everyone has to be a wrestler. Some people can shine as managers, and Raquel did that when I saw her at FCW last weekend. She does well when paired with a male superstar, and I think she could benefit one of them if they team up. I feel Corey Graves is a star through every aspect in his own right, but I’m kind of biased to wanting them together since that was who she managed last weekend and it clicked really well.

Nonetheless, I’m not quite sure where NXT is heading, which is my one big problem left with the show. There’s so many people they’re trying to spotlight that you can have someone hyped up with videos for weeks, debut, and then not be seen or heard from for another five weeks. I don’t even know what the Paige interview is leading to unless they have more backstage segments planned because as far as I know, the two don’t even meet up down the road. Who knows though? They’re at least picking the quality up since it began, and Rome wasn’t built in a day so maybe down the road it’ll get better. I’m still not 100% on board, but I’m at least interested enough to continue on.