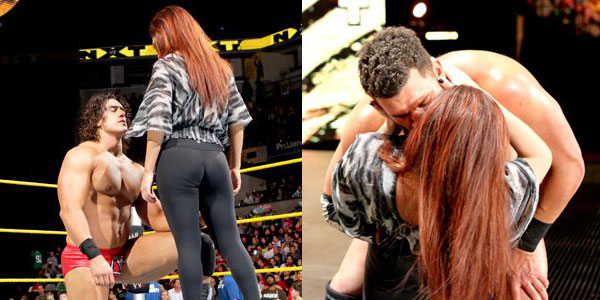 Just when we think we have all the answers, NXT changes the questions. I love this show more than any other in wrestling, and it’s no secret that a big part of it is the saga between Derrick Bateman, Dirty (Johnny) Curty, and Maxine. Say what you will, but this is the best thing going in the entire company, and tonight we had a big step forward in discovering “Maxine’s Choice”… but like always, NXT is very unpredictable. Could what transpired tonight mean Maxine has made her decision? Or will something else happen leading to another twist in this tale of treachery? There’s only two ways to find out… Either watch NXT or scroll on down and check out this recap.

We first head backstage to see Derrick Bateman with his head up against a strategically placed purple trunk. Suddenly, up from behind walks his ex-fiancée, Maxine, as he abruptly turns to her and tells her to hold on. Derrick claims that he knows she doesn’t want to see or hear from him at all, which she agrees with, only he calls them both crazy, citing that the craziest thing about them is the love they share. Maxine sheds some insight on the weekends of BateMax, that of which consisted of pillow fights and Derrick sobbing on Maxine’s shoulder during their viewings of Titanic as he got snot in her popcorn! Derrick claims that he didn’t cry, and that popcorn is delicious no matter what!

Maxine tells him that this is his problem — he doesn’t listen to her. She claims that right now he should be preparing for his match with Dirty Curty later tonight. Derrick says Maxine just proved why he loves her so much, because she keeps his eyes on the prize! He then proclaims that once he beats Dirty Curty tonight, they will become the power couple that the WWE so desperately needs. (Side note: They already are everything I’ve wanted in WWE for so long.) Maxine begrudgingly agrees with him and goes to walk off, but he stops her and immediately pulls her in for a big ol’ make-out session. She tries to fight it at first, but decides to just let it happen. Once they come up for air, Maxine smacks the taste out of Derrick’s mouth as both of them head off. Suddenly… the camera pans over to that scoundrel, Dirty Curty, as he stands behind a corner scouting their every move.

Continuing on in our backstage segments this evening, Maxine is shown once again walking through this never ending hallway. She stumbles upon her former fellow NXT rookie, Aksana! Aksana stands against a wall looking on a phone, which she informs us belongs to her Teddy bear. She tells Maxine that she found “some email” on the phone that she thinks Maxine should see. Maxine takes the phone and reads aloud a message sent from Derrick, which tells Teddy Long that he’s looking forward to becoming a SmackDown Superstar, only he’s tired of Maxine dragging him down! She continues on with the message which accuses Maxine of riding Derrick’s coattails and asking to leave her on NXT “where she belongs”. Maxine becomes ENRAGED as she demands to know where Aksana got this. Not only that, but she questions if Dirty Curty put Aksana up to this?! Aksana denies all allegations and claims that she’s just trying to help her. Maxine lets out a scream of fury, before handing the phone back and walking off! I wouldn’t want to be Derrick right about now…

As we join an ongoing match between Derrick Bateman and Dirty Curty, Maxine walks out onto the stage and makes her way all the way to ringside. Curty becomes briefly distracted with her as he locks in a cravate on Derrick. Once we return from a commercial break, Johnny locks in another submission to keep him down. Maxine can be seen scouting the action from ringside, as Josh Mathews tries to get a word with her only she shoots him down much to my approval for his constant disses during her season of NXT. (Payback’s a bitch, Mathews.) Dirty Curty punches Derrick in the head and brings him over to the ropes where he proceeds to choke him out to Maxine’s glare of doom.

Curtis with a snapmare, following it up with another headlock until Bateman fights out and hits a nice back suplex. Both men are down as the referee starts his count and Maxine walks closer to the ring apron. Once they get to a vertical base, Derrick Bateman takes control with some clotheslines and an impressive running dropkick into a snap neckbreaker for a two count. Bateman tries to fire the crowd up, but as he charges for his opponent, Dirty Curty elbows him in the face and hits a spinning clothesline for a near fall.

Johnny picks Derrick up and goes for a suplex, but Derrick escapes and tosses him into the corner where he proceeds to quickly roll him up for the victory! Maxine makes her way into the ring as Bateman drops to one knee, and they engage in a brief stare together until she exits the ring and heads up the ramp. Dirty Curty then walks out from the back and the two meet on the stage. Maxine slaps him across the face, before grabbing his head, and in my finest Jim Ross impersonation… BAH GAWD, she’s on him like a government mule! Maxine and Dirty Curty engage in a huge makeoutmania session as Derrick watches on in sorrow from the ring! The two walk backstage together, as Maxine’s Choice seems to have been made with tonight’s show coming to a close! It’s Dirty (Curty) Times ahead folks…

Thoughts: Maxine. Johnny. Derrick. Brilliant. This is the best thing going in all of wrestling for me. I’m never disappointed in anything these three do together and they pull off each of their segments so well. BateMax will be missed, but Curtsine will be an interesting duo. I really hope tonight isn’t the end of their story together because I feel like wrestling won’t be fun without it. Granted, I do enjoy primarily everyone on NXT, but these three are what make this show for me. They do better stuff than anything I’ve seen on Raw or SmackDown in a long time. I could sit here and say how I wish more people were watching, but that’s not going to get me anywhere. Whatever these three do is gold, and I hope to be entertained by them for a long time. People want to keep asking when NXT is going to end? I hope it never does!