NXT Watch (May 30th, 2012): Kaitlyn Collides with Tamina, While Maxine Reminds Us of Happier Times 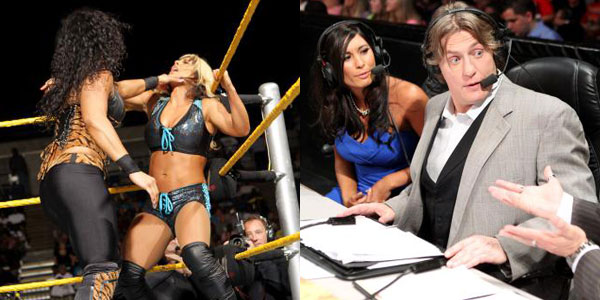 Good evening ladies and gents, and welcome to your one stop shop for all things NXT. Before we get started tonight, I want to provide a little history lesson. Now, if you know anything about grief, you know that there is an infamous model consisting of five stages. The first being denial, as in when I saw the first episode of ‘this’ version of NXT and believed that it was just a one week thing, shrugging off the thought this would be permanent. Next is anger, aka last week when I had to reach inside and pull out my first negative NXT review since I took over recapping the show last August. Third is bargaining, which happened earlier this week away from the recaps when I pleaded with whoever would listen to just grant me closure to the storylines. Who was attacking people backstage? Where is happy Maxine? WHAT HAPPENED TO JTG AND ALICIA FOX?! Okay… calming down. The fourth stage is known as depression, which is how I felt watching tonight’s episode. Don’t get me wrong, the matches were fantastic, and that goes for beyond just the Divas. This week, however, reverted back to all NXT originals, thus no Ezekiel, no Heath Slater, and no Great Khali… meaning that when I watched someone make their entrance (or get screwed out of one by a commercial like Derrick Bateman!), I thought of the good times they had entertaining. You know, since every single person actually got to do something pre-three weeks ago. But what’s done is done, and now I must face the final stage of the grief process… acceptance. So let’s get started with tonight’s show.

Tonight, we see Kaitlyn face off against Tamina Snuka in a match that pits two friendly faces against one another. Not only that, but Maxine joins the commentary booth to provide some of the humor that I have so greatly missed as of late. Now without any further ado… let us begin!

Out to the ringside area we head, as Josh Matthews and William Regal are joined by… are joined by… MAXINE. I need a minute to calm myself down from the thought of someone on NXT actually getting a speaking role, and once I do that, I then get up and salute the now strangely nice theme song of Kaitlyn even though I hated it when it debuted. Kaitlyn walks out and slaps hands with the fans, as Josh Mathews for what I feel is the fifty billionth time, incorrectly states that William Regal named Maxine the M.V.P. of the show even though Regal has corrected him every time before. Good lord, this isn’t Raw or SmackDown where you have to say the same three facts about someone over and over, Josh, this is NXT and our standards are much higher.

William Regal corrects him AGAIN, as the national anthem of the Divas division “TA-MEE-NA” hits, and our jungle queen walks out still happy and friendly which disappoints me as I had called a few weeks ago that I believed Tamina would just randomly turn heel with no explanation because they would realize things are incredibly thin on the heel side. I mean, it’s good that they still count her as a face since there would be no reason to turn her heel out of nowhere, but for my own selfish reasoning I’m upset dang it!

Tamina and Kaitlyn lock up as the NXT 3 winner shoves Madam Snuka to the ropes. Another lock up, as Tamina this time takes control and shoves Kaitlyn back. Snuka scores with a few vicious chops to the chest, before Kaitlyn fights back with an uppercut and a dropkick! An armdrag follows up, as she applies a submission to Tamina. Kaitlyn transitions it into a leg scissors, as Maxine provides a great quote, “I’m not here for the Divas, I’m here for me… and the sooner people realize that the better off we all are.” Both women get up, as Tamina drags Kaitlyn into the corner and the two trade chops. Suddenly Maxine perks up upon the discussion of Kaitlyn’s two toned hair! Tamina and Kaitlyn continue to try and one up each other with some stiff shots, as Tamina scores with a running butt splash!

A snapmare follows up with Tamina locking in an arm lock submission, as Maxine continues to amazingly go off on Kaitlyn’s hair. “How confused are you?! Did you just wake up one day like oh I want to be a blond, then wake up the next day oh I want to be a brunette.” Excuse me for a moment folks, but I need to pause here because I’m actually laughing and finding humor again! “If you’re that indecisive about your hair, how indecisive are you about your life… how do you make life choices correctly?!” Ahhhh, Maxine is seriously on her game when discussing Kaitlyn’s hair as she should be.

Tamina whips Kaitlyn across the ring and hits a huge legdrop, followed up with some knees to the face. From there, the daughter of Jimmy Snuka applies a chin lock, to which Kaitlyn finally manages to fight out… or not! Tamina slams her back down and goes for a few failed two counts as she reverts back to the submission. Kaitlyn starts to escape with some punches, before finally breaking out and hitting a nice crossbody. Tamina does a really nice roll through into a backslide, but just another two count. They exchange Irish Whips, until Kaitlyn leaps down to the ground and trips Tamina up, before then converting into the leg scissors submission for the victory as Snuka taps out! Kaitlyn celebrates her win, as Maxine stares on very unimpressed.

Thoughts: I really really loved this match. I thought Kaitlyn and Tamina meshed surpisingly well together, and flowed tremendously. It didn’t feel like they were just going through the motions or didn’t know where to go next, rather they were putting on a legit show. I commend them both on the improvement together, because even though we saw this match two times before towards the beginning of NXT’s glory days, it still felt fresh and the two stepped up to the plate & succeeded. Bravo ladies.

Commentary wise, Maxine had one of those nights where when she was on she was ON and when she was off, it was really off. On one hand, she sounded kind of depressed in parts (and who can blame her with how abruptly the show changed) like she didn’t really want to be there. I think once she even said she didn’t know what she was doing out there and was just told to come out! However, when she was talking about Kaitlyn’s two toned hair, I literally wanted to get up and bow to my computer screen. FINALLY something humorous has been bestowed upon us. It doesn’t matter how brief the moment, because like I said above, I will take anything! If that’s the only way we can get some humor, then put a Superstar or Diva on commentary for every match, stat.

Overall, while it will never ever reach the level that any episode from August 2011-early May 2012 gave us, of the past three weeks, I would say this has been the better episode. The one thing that irks me the most is WWE treating the show like utter crap by never putting it up on time or giving fans a heads up as to when it will be delayed until (since this is a weekly occurrence)… but never fear, I’m holding in all of my bottled emotions until the final episode of NXT Redemption where you will get my long brutally honest candid thoughts of how I feel about topics including the show, the people involved, and the disgust I have for how it gets treated as the ugly stepsister of WWE programming. Trust me, this will top every shoot interview you’ve ever listened to so stay tuned!