NXT Watch (October 24th, 2012): Divas of the Present Meet the Future Once More, But Who Will Emerge Victorious? 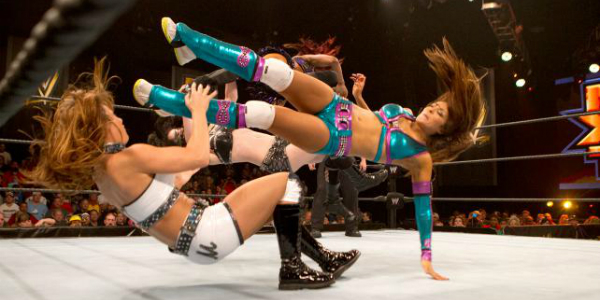 Greetings all, and welcome to this week’s NXT watch. I’ve lost track of time when it comes to the black roped shows use of the females as of late, but that doesn’t mean they’re gone for good, as we are treated to tag team action! Former Divas Champion, Layla will team up with the woman whose many face/heel turns have lead me to believe she’s nearly as bipolar as Carrie Mathison of hit Showtime series, Homeland, Alicia Fox. Together, they will face off against NXT females, Audrey Marie and fan favorite, Paige. Which Diva duo will come out on top? Let’s find out!

The upbeat, perky, insatiable theme of Layla hits, and out walks both she and Alicia Fox for this tag team bout. Following the rocker entrance theme of Paige, both she and Audrey Marie step out looking just as ready to compete tonight. I’m not quite sure who is what when it comes to dispositions, but this match is beyond fresh and never before seen that I don’t even care! The bell sounds as Paige and Alicia kick things off. The crowd, almost in routine now, chants for this raven haired lady, as she and Fox trade attempts grappling for position. Paige with a nice armdrag, following it up with an equally nice dropkick. Into a flipping roll up for a near fall, as Alicia then takes control with a sick backbreaker for a two count as Paige kicks out.

Paige with a kick to the face, as she hits a reverse monkey flip and in comes Audrey and Layla. The crowd now gets behind our salsa’ing former Champion, who flips Audrey over like a bolt of lightening. Audrey takes Layla down, as Layla does the same for a set of near falls. Marie goes for a kick, and then ends up turning it into a one legged monkey flip! Layla with her bridging roll through pin for a two count, as Audrey then scores a jacknife for another near fall. Layla nails Audrey with a huge kick to the jaw, but the Divas will not stay down. Layla with another kick, before tagging in Alicia who decimates Audrey with a stiff clothesline to the face. Fox then continues to dismantle Audrey Marie like a rag doll, good lord.

Alicia with a bridge pin for a two count, before applying a chin lock as the crowd gets behind Audrey to tag in Paige. Audrey tries to fight out, but Fox continues the advantage. From there, Alicia goes for a suplex, but Audrey rolls through into a near fall and flies into a tag to Paige! Layla comes in as well and kills Paige with a clothesline and a dropkick! She hits her crossbody for a two count, as she then accidentally boots Alicia. Paige now takes control and goes for the RamPaige, but Layla fights out and Audrey blind tags herself in. Paige turns it into a bodyslam and tells Paige to get out of the ring, as Marie then lays on top of Layla for the pin… only Layla flips it over and gets the three count over Audrey! Paige does not look amused with the white and purple clad Diva, as this match comes to a close.

Thoughts: I absolutely loved this match. Like I said above, it was fresh and didn’t feel like anything we’d seen before, plus it seems like Layla is finally the woman who can steal some of the chants away from Paige! The action was great, and I was particularly impressed with Audrey throughout as well. Clearly she’s the weak link of the four due to experience, but I felt she held her own out there and even got to show a little character towards the end as she stole the impending victory away from her own partner. The part where Alicia and Audrey were legal would have to be my favorite though because that was beyond brutal. I don’t know if Audrey accidentally stole Alicia’s fancy fox hood or something, but she pissed Fox off in a way that I’ve not seen Alicia act in a long time through the intensity. Overall this was a great match and I love how NXT is giving us so many of these as of late.