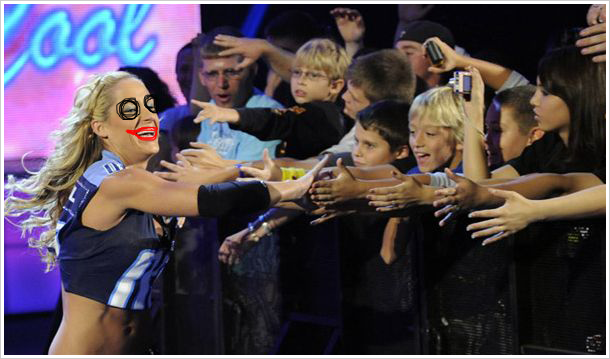 We here at Diva Dirt have long been accused of favoring certain Divas and shamelessly bashing others – look around in any post and you’ll witness the outrage. We have defended our opinions countless times with logic and reasoning, but the time has come to face the ugly truth – we are biased. Yes, it’s true. We specifically target your favorite Diva, pointing out faults that don’t exist and ignoring their countless glorious attributes. Whoever she is, you can bet your ass that we’re reading your mind and are determined to make her a martyr for our enjoyment. If you like Candice, we say she botches. You like Maria? She dresses like a tranny clown. What about Mickie? She’s a slut who takes nasty photos. Kelly Kelly? Her moves are too ~flashy~. Yes, yes.. No one is safe from our reign of terror. Well, that is, except for Melina and Torrie. You know, because they’re our favorites. They could fart and we’d dub it the greatest fart ever unleashed on the world. Why is that? Because we bash, we discriminate. We’re biased. You caught us red handed!

With that out of the way, we’re ushering in a new feature to Diva Dirt – Owning Up. We’ll be giving you, the readers, what you want. We’ll be taking your comments and applying them to our own viewpoints, using the same techniques many of you use to judge what we do and what the Divas do. It’s unmitigated bashing! At least now you can bitch with some basis.. WARNING: Markyness ahead. We will see what we want to see and interpret things the way we see fit. If it’s not true, so what? We bash all the time, remember? This shouldn’t be any different..

Now, on to this week’s SmackDown match between Michelle McCool and Maryse. Actually, I prefer to amend Michelle’s surname to a more apt title – “McSlutHoBag” – because, you know, she sleeps with The Undertaker, and there’s no way in hell she’d be where she is today if she wasn’t screwing one of the WWE’s legends. Maryse is French, so obviously she can’t speak well. I can’t understand her! She sounds soooo stupid with that French accent – how can anyone take her seriously? Ugh.. I know, women should be seen and not heard. Never a truer statement in this case..

But let’s move on to the match, because THAT’s where the fun is. Which reminds me – they should air SmackDown live on Fridays. Why is that, you ask? Because then we’d see how you could hear a pin drop during Michelle’s entrance, not to mention during the match. Obviously, the fans don’t care. The crowd reactions are OBVIOUSLY piped in. There’s no possible way that the SmackDown Divas could be even close to the Raw Divas in popularity. Raw is LIVE, thus it’s better. It’s just science. Nevertheless, the WWE insists on shoving McSlutHoBag down our throats, even though we couldn’t give two shits about her. She has NO personality! Plus, her voice is grating. Anyone with a southern accent should be forced to choose: hire a dialect coach or DIE. A southern accent on a Diva isn’t sexy, and being sexy is a Diva’s #1 priority. If they can’t wrestle in a bikini without so much as a thigh jiggling, they’re not fit to grace my television screen.

As for the actual wrestling, you’ve got to be KIDDING me. Michelle does the same moves over and over again – sloppily, I might add. Her “Wings of Love” is sloppy and half-assed, not to mention completely ripped off from Triple H’s pedigree. Hello! Both moves start out the same – how can you NOT see that? Aside from her repetitiveness and thievery, McSlutBagHo can’t sell. That’s obviously because she’s dubbed herself the Diva locker room leader and refuses to look weak in comparison to any other Diva. Will her reign of terror ever end? Probably not, since she’s screwing Taker. Until he retires (or croaks, whichever happens first), she’s here to stay, and will NEVER lose. She’s invincible – let’s face it. What about Maryse? Well, she’s exaggerated in every way – selling, submission holds, performing offensive moves.. Maybe if she learned English, she’d be better at wrestling, because she’s awful now. She must not be able to understand the referee when he’s feeding her what moves to do from that little mic in his ear that connects to the backstage area. Those people who are praising her and kissing her ass need to wake up and smell the coffee – she’s nothing special. Just because she can perform a few moves doesn’t make her talented. Your standards must be incredibly low if you think she’s even adequate in the ring.

The match itself was sloppy, slow, and uninteresting. But honestly, what else would you expect out of SmackDown? Their ring work is as ugly as that Diva’s Championship that could slide off of McSlutHoBag’s nonexistent waist. How does this shit even make it to TV? They must edit the crap out of it – removing the numerous botches – to make it even remotely watchable. Well, they didn’t succeed in that, but you’ve got to fill up showtime somehow, right? How about they edit Triple H’s entrance and make it play in slo-mo? I’d get more satisfaction out of that than see these two blonde whores try to wrestle.

In conclusion, SmackDown’s match was more of the same, and even though I hate it, I’ll continue to watch it. Why? Because if I didn’t, I’d have nothing to bitch about, now would I?