Paige on Her Engagement, Rosa Mendes’s Pregnancy, the Pressure to Conform & More 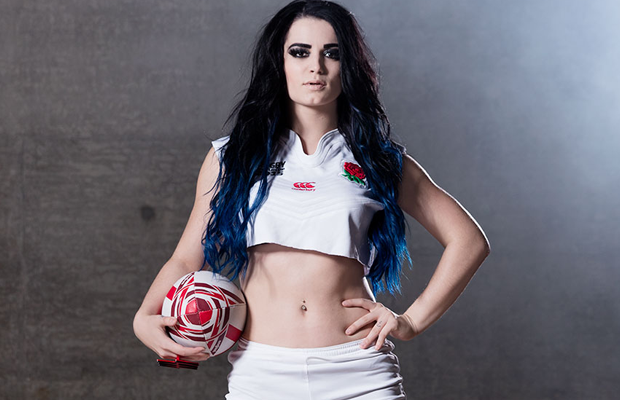 To hype this Tuesday’s Total Divas season finale, Paige spoke to E! Online about her engagement, the pregnancy of former castmate Rosa Mendes, the possibility of starring in another reality show and more.

Her wedding planning: “We haven’t gotten very far yet. We haven’t started planning anything because I think I could be engaged for five years. I don’t want to rush into stuff. But I’ll keep you posted as soon as I know what’s going on.”

Rosa’s pregnancy: “She’s doing absolutely amazing! She’s getting bigger and bigger. Her body’s staying skinny, but she’s just got a belly. Lucky chick! But she’s still working so hard. She’s got a new kids’ line coming out. She’s so excited and she looks beautiful. I’m actually the one who set [her and her boyfriend, Bobby] up. I felt like a little cupid. They text me every day like, “We love you. We can’t believe you did this for us.” I have a few things planned for Rosa that she doesn’t know about, which you’ll see next season.”

Discovering her signature style: “I’ve always been like that. That’s how I dressed back in England, too. I think I got it from my mother because she’s very punky and stuff. But I’ll wear clothes until they’re literally falling off me because I don’t like to go out and buy expensive clothes when I don’t need to. That’s just how I feel comfortable. I’m not a Louis Vuitton or Dior chick. I like my Vans, my ripped jeans and my snapbacks.”

The pressure to conform: “One of my tryouts with WWE, I tried to conform. I tried to be what I thought I was supposed to be, so I dyed my hair lighter, I got a tan, took my piercings out and wore color, and they didn’t like it. I came back as myself and that’s how I got signed. I never felt any pressure from them to conform. They’ve always liked me for the way I am and they never wanted to change me. It’s great. I’m lucky, I guess.”

Would the Knight family star in a reality show?: “Oh yeah! Absolutely! My family is crazy. It would be like watching The Osbournes, but 20 times wilder!”

You can read the full interview on E! Online.

The season finale of Total Divas airs this Tuesday at 9pm ET on E!.