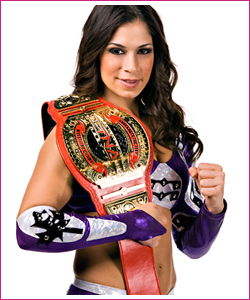 SARITA
The second entry on this year’s year-end Perfect 10 is another newcomer — TNA Knockout, Sarita. They say great things come in small packages and Sarita is like pocket dynamite. Like many wrestling greats, Sarita — real name Sarah Stock — hails from Canada but has spent much of her career in Mexico where she picked up the art of lucha libre and has identified herself as an aerial assaulting, high flying badass.

Joining TNA in April, there was some serious buzz around this girl. There was talk that she would be pushed as the Knockouts division’s new top babyface — filling the spot left behind by Gail Kim. In an unlucky coincidence for Sarita, former WWE Diva Victoria was signed a month or so later and was eventually given the spot. But still, Sarita’s debut on Impact was much hyped with weeks of video packages leading to her debut match in July against fellow newcomer, Alissa Flash. The match was well acclaimed by fans and critics alike.

In August, Sarita was thrown together in a tag team match with former Knockouts Champion, Taylor Wilde against Flash and Traci Brooks. Again, the chance teaming of the two was much praised and led to TNA management putting them together permanently — Saritaylor was born!

The duo became the first ever Knockouts Tag Team Champions in September after making it to the finals of a tournament to determine the inaugual champions. In the months since, Sarita and Taylor have staved off competition from The Beautiful People in several pay per view matches. Meanwhile, Sarita has also shown her own individual prowess in matches with the likes of Alissa Flash again in November, as well as Hamada.

The talented Knockout was perhaps the most successful of a slew of new girls brought in by TNA in ’09. Where the others have fallen by the wayside due to TNA not giving them much to do, Sarita quickly found her feet with tag team partner, Taylor Wilde. The champions look to go into 2010 with the titles firmly around their waist but if Sarita’s singles matches are anything to go by, she could have a good shot at the Knockouts Title too.

Check back tomorrow for #8