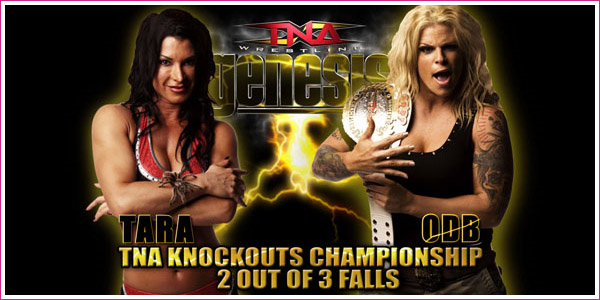 Erin: This feud, in my opinion, hasn’t really earned a 2 out of 3 falls match, especially one for the Knockouts Title so soon after the last title match. I suppose this could be considered Tara’s rematch, and it shouldn’t be completely unrealistic to suggest that she could win back her title, but why would they have given it to ODB in the first place only to hand it back to Tara in their next match together? Maybe ODB’s win on the big live Impact was to make the show seem upredictable~ and the Genesis match will serve to put things back where they were? I’ll stick with that reasoning, because otherwise I can’t see a reason why they had Tara lose the title so soon (again!), only to have them face off for the title again two weeks later. There’s been no buildup to this match, so it would make sense for this to serve as a “reset” button on Tara’s title reign. At least, I hope so. Tara for the win.

Melanie: This is a match that almost unanimously no one wants to see. Of all the feuds, of all the Knockouts… an elongated two out of three falls bout with these two? This feud has lit no one on fire and the matches between the two have not been anything to write home about. Tara is great in the ring and I respect her mucho but I’m not crazy about the chemistry between her and ODB. I’d pay to see a two out of three falls match between Tara and Hamada or Alissa Flash or Sarita — not ODB. I’m with Erin here, it seems as though TNA was going for the shock value and hype on the live Monday Impact hence why ODB won the title there. I see Tara getting her revenge here and taking the belt, hopefully not to lose it just 20 days later [if we’re incrementing 5 each time — first run lost it after 10, then 15]. A straight wrestling match, two out of three falls, seems in Tara’s favour so I wouldn’t be surprised to see her take it in two falls if we’re pressed for time. Even as a big Tara fan I can admit that becoming a three time Knockouts Champion in such little time is far too bloated. Please give her the run she deserves this time!

Steven: I know I’ve said this a million times, but this feud has run it’s course and needs to end. That said, I see ODB retaining this Sunday at Genesis. If ODB manages to pull out the win, this match could serve as the blow off match for this rivalry and open the door for a new challenger. However, with the way TNA has been playing Hot Potato with the title as of late, the opposite is completely plausible. Either way, we’ll most likely be seeing three Tara vs ODB matches come tonight and that’s enough to last a lifetime.