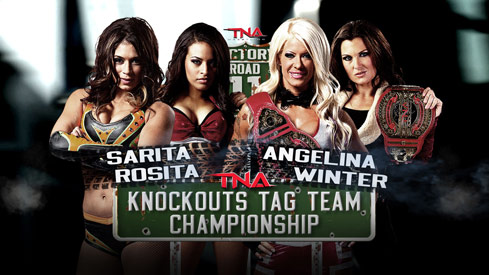 Cryssi: Is Velvet Sky still involved with Sarita? Does she still hate Winter? If the answer is “yes” to either or both questions then expect Vel Vel to inadvertently cost Angelina and Winter the match tonight. Sarita & Rosita will emerge as the new TNA Knockouts Tag Team Champions.

David: The “spicy hot cousins” get their shot at the TNA Knockouts Tag Team Championships tonight. Sarita and Rosita will square off with defending champions Angelina and Winter and I’m pretty excited because fundamentally I love the concept of women’s tag team champions. I give TNA credit for booking this match on a PPV. I hope TNA gives these girls a nice amount of time to showcase each of the wrestlers because I think it could raise the profile of the tag team belts. I think Angelina & Winter are going to retain their titles…for now…but it is only a matter of time before Sarita and Rosita are the champions. They are a really talented team! Of course I’ve been wrong with my last 420 TNA predictions, so if you’re in Vegas this weekend put your money on hot and spicy.

Eric: Did Winter and Vel Vel settle their beef off camera? Are they no longer feuding? No? Okay then. Sarita and Rosita are the only tag team that make sense. Sarita & Rosita win via cheating and Winter disappears for a little bit for no apparent reason. Thanks, TNA!

Erin: It would be a safe bet so say that they’re going to stick Angelina Pivarnick into this somehow, and that will likely lead to bad things for the Knockouts Tag Team Champions. I’m not sure they’re actually going to have Angelina and Winter lose the titles, but they’re definitely going to be on the receiving end of some revenge. I don’t think TNA’s quite done building this weird Angelina/Winter relationship, so I think they’ll probably need to hold onto the titles in order for them to let it develop more, if only to provide that sense of awkwardness between the Beautiful People. I say that Angelina & Winter will retain their titles, but it will hardly be a clean victory.

Melanie: An interesting change from all of the singles titles matches on pay per view. I’m actually really looking forward to this match and I’m excited to see Rosita and Winter make their pay per view debuts. My gut is going with Sarita & Rosita for the victory.