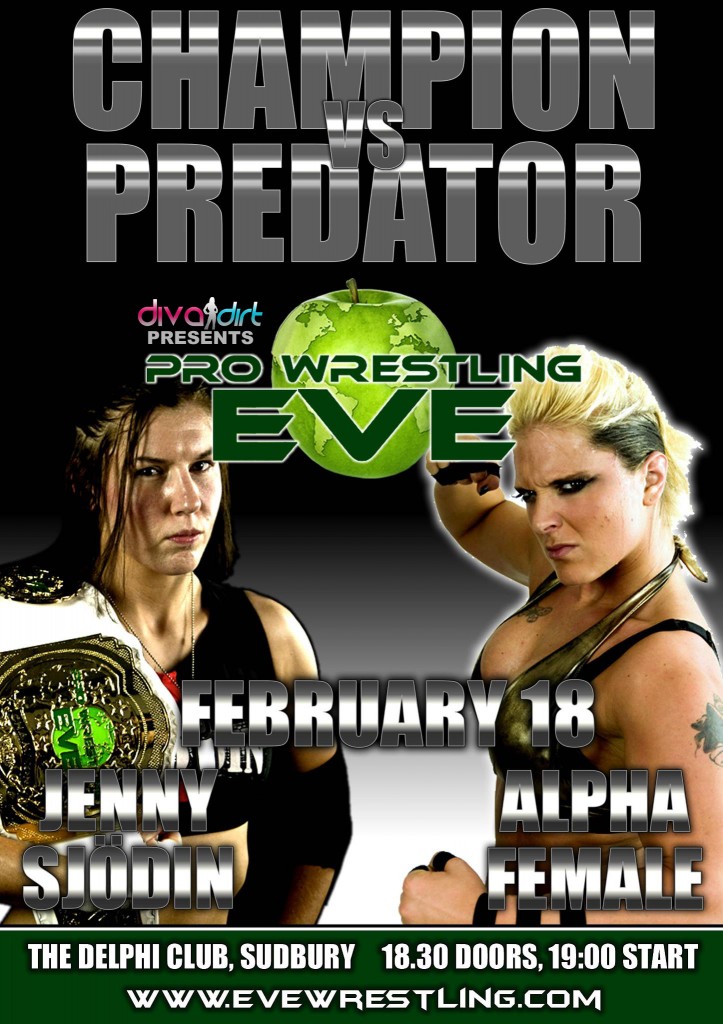 Fans will be able to watch “No Man’s Land: Sjodin vs Alpha” exclusively on Diva Dirt on Saturday, February 18th at 7pm GMT (2pm ET). The Internet pay per view will mark the first pro wrestling iPPV emanating from Europe.

Speaking on the big announcement, Diva Dirt’s Editor in Chief, Melanie Rob said: “We are honored to be working with Pro-Wrestling: EVE to present this historic event. Diva Dirt has always broken barriers and set the bar high, so presenting a full Internet pay per view seems just up our street! We can’t wait to see what Pro-Wrestling: EVE brings to the table on February 18th.”

SUDBURY, SUFFOLK / January 6th, 2012 — Europe’s number one all-female wrestling promotion Pro-Wrestling: EVE is pleased to announce today its historic debut on Internet pay per view. EVE will present “No Man’s Land: Sjodin vs Alpha” live on iPPV on Saturday, February 18th, 2012 via Diva Dirt (http://diva-dirt.com), the number one female wrestling website in the world. The show will emanate from The Delphi Club in Sudbury, Suffolk.

This landmark event marks the first time a European professional wrestling company has presented an event on Internet pay per view, and it also makes EVE just the second all-female promotion to present a full card on iPPV.

In a statement, EVE co-promoter Emily Read said: “We’re so excited to be able to give wrestling fans around the world the opportunity to see the European professionals of Pro-Wrestling: EVE live from the comfort of their own home on February 18.”

“For a long time European female professional wrestling has not been given the coverage many feel it deserves but now thanks to iPPV and Diva-Dirt.com, we’re able to showcase to the world just what extraordinary talents these amazing women are as they put on one of the most exciting and ground-breaking events in female wrestling history!”

Headlining “No Man’s Land: Sjodin vs Alpha” will be the biggest main event in EVE to date as Pro-Wrestling: EVE Champion,“The Female Fight Machine” Jenny Sjodin defends against “The Professional Predator” Alpha Female. As one of the most technically talented females to step foot in a wrestling ring, Jenny Sjodin’s deadly cross arm-breaker submission has made many an EVE star tap. However, the 6’1” Alpha Female has bulldozed her way through the competition with 10 wins and just one loss in an EVE ring, making her Sjodin’s toughest challenge to date. Who will come out on top when EVE’s unstoppable force meets its immovable object? Tune in live on Internet pay per view on February 18th!

Pro-Wrestling: EVE “No Man’s Land: Sjodin vs Alpha” is available to fans worldwide and airs live on Saturday, February 18th, 2012 at the following times:

Pro-Wrestling: EVE “No Man’s Land: Sjodin vs Alpha” is presented exclusively by Diva Dirt (http://diva-dirt.com), the world’s most popular female wrestling website. Fans will be able to watch the Internet pay per view live at http://diva-dirt.com/evelive on Saturday, February 18th.

Fans and supporters can pre-order the iPPV for just £9.95 (approx. $15) by visiting http://evewrestling.com from Saturday, January 7th. Please note: Customers who order the iPPV will receive a unique customer code via email which they must enter to access the live stream on diva-dirt.com/evelive on February 18th. If you have any issues, questions or queries feel free to contact [email protected]