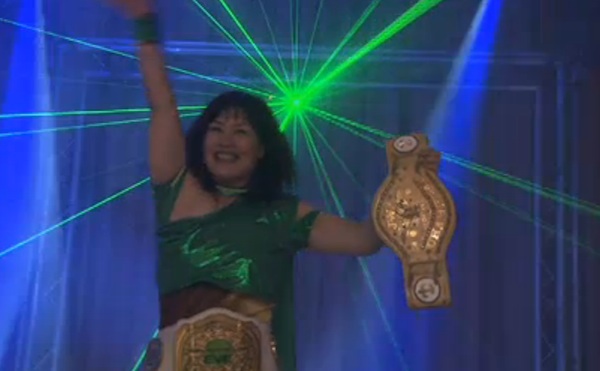 Pro-Wrestling: EVE promised its biggest ever event, flying in talent from both the US and Japan for a female wrestling extravaganza — and one of those women is now the new EVE Champion.

Veteran Japanese star Emi Sakura, one of the founders of Japan’s Ice Ribbon promotion, ended the night as new Pro-Wrestling: EVE Champion in the second of two title changes.

Feeling cocky, the new champion issued an open challenge to anyone in the lockerroom to face her for a second title match. After taking out Kirsty Love and April Davids with the aid of her newly won title belt, Emi Sakura then challenged Storm to a champion vs champion match.

Sakura hit her 450 splash for the victory and closed the event as both the JWP Openweight Champion and EVE Champion.

One can’t overlook the irony of the European promotion’s championship being on its way to Japan.

Thoughts: Nikki Storm just got Jillian‘d! I’m not a fan of curveball endings, but congratulations to Emi Sakura, who will no doubt bring much prestige to the EVE Championship as a respected joshi veteran. Definitely go out of your way to catch the Alpha vs Storm match, it was a fantastic main event. I would’ve liked to see the show end with Storm as champion, however.