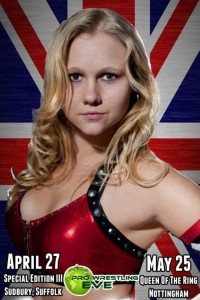 Last weekend Pro Wrestling:EVE were in Sudbury, Suffolk for their last ever show at the Delphi Centre, “Special Edition III”. The show featured the EVE debut of rising Canadian star Leah Von Dutch, as well as appearances from Ted DiBiase and Tommy Dreamer.

See below for the results:

Were you in attendance? What did you think of the show? Let us know in the comments!