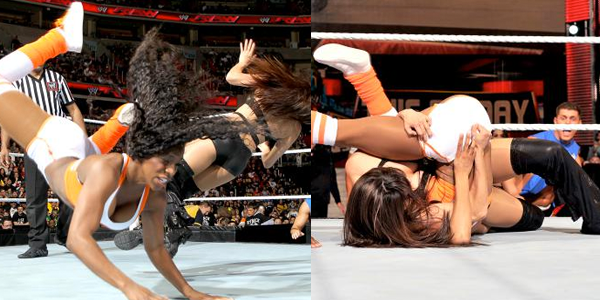 Good Tuesday afternoon, readers! WrestleMania week is well underway and last night on Raw, we got a teaser of the action we could see this upcoming Sunday. The Bella Twins, Brie and Nikki, took on the Funkdactyls, Naomi and Cameron, in a match that I’m guessing the majority of us wish was the ‘Mania matchup instead of having four guys involved as well. But hey, something is better than nothing, so lets take a look at the build up we got last night.

This match took a totally different direction than I thought it would. At first, I was a little confused as to why Naomi would start the match and build up to the hot tag with Cameron, but it totally worked. Cameron came in on fire, and absolutely exploded in the ring. She’s so funny to me, because out of all the contestants on Tough Enough, female and male, who would have thought Cameron would be the one to make it, and make it all the way to WrestleMania mind you? Some people work their entire careers to make it to the WWE and still never get a match the SuperBowl of Sports Entertainment, but Alicia Fox and Melina‘s number one fan has made it. That just sort of puts this all in perspective, doesn’t it?

And to be honest, I think Cameron deserves this. Working with Naomi has been amazing for her, and I love them as a team. I think they compliment each other well, and I think this tag match proved that Cameron is getting better. Her moves looked great, the finish was very clever, and I think if she sticks with it and continues to work hard, she could end up better than any one of us ever thought.

As far as Naomi and both Bellas go, I thought Naomi worked great with both of them. I loved how they decided to focus on one specific body part when it came to Naomi, and she sold it well. They were given a huge amount of time and the guys were a total after thought. I absolutely adored this match, loved all four ladies tonight, and hope they get the bulk of the time during the WrestleMania match. My biggest fear is that this was their ‘Mania payday and that come Sunday, they’re gunna end up standing there looking gorgeous in new outfits, but I’m trying to push that thought aside.

Despite the fact we got what we got and I LOVED it, I can’t help but feel kind of let down. With all the AJ/Kaitlyn teasers we have gotten the past couple of weeks, I was hopeful. I was very hopeful that the two of them would end up in some type of match together and we could finally the next great Diva rivarly. I know it’s reaching a bit, but Kaitlyn and AJ have that kind of potential to me. They’ve both got the talent and charisma, and if given the chance, I really feel like they could shine. When Kaitlyn didn’t bother to show up during the tag match, I knew whatever they could have been building for ‘Mania, more than likely had just gotten shelved. I haven’t seen the spoilers for any of the other shows to be fair, and we may end up with a last minute match, but whatever hope I had isn’t there anymore to be honest.

So overall, tonight was full of love and disappointment. I loved what we saw, but I was let down there wasn’t more to hope for. Things seem to change all the time, though, and you never know. But being realistic, I think we should just be happy to see the Funkdactyls and the Bellas on the card. For a while, it seemed like we weren’t going to get anything at all.

Stayed tuned to Diva Dirt all this week for ‘Mania Week treats. Look out this weekend as WrestleMania diaries and exclusives will be going up.