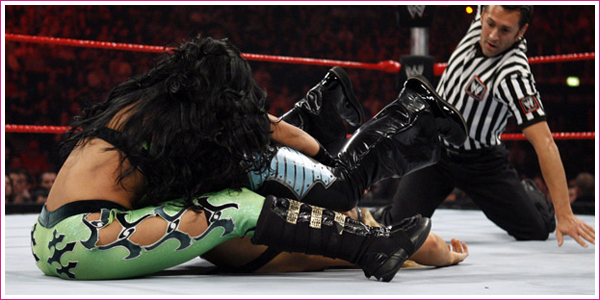 The Women’s Champion said goodbye to Raw last night with a huge exclamation mark ending her three year stint on the Monday night show. Melina‘s Raw farewell (for now) closed the chapter on the past three years of her life as well as her feud with Beth Phoenix in grandiose fashion and we loved every second of it!

As I wrote yesterday in the spoilers post, it looks as though WWE is opting for blow-off matches for the Divas before they move over to their new brands. Last week on SmackDown, Gail Kim and Maryse finally went one-on-one before Maryse moves to Raw and last night, it was Beth and Melina. I know some were disappointed that the new rosters didn’t take affect last night; there was no Maryse, Bella Twins – or for that matter, any of the Raw mainstays such as Mickie James and Kelly Kelly. However I must point out that because of the current ‘WrestleMania Revenge’ tour, the rosters are currently pre-Draft as advertised, thus Maryse is still touring with SmackDown and likely competed at their house show in Scotland last night. It does mean that we may see Maryse on SmackDown this Friday, spoilers should be up before the end of the day. However, this does call into question the point of the Draft – as the new rosters won’t shape up until two weeks after the fact. So we will likely see the new rosters finally take shape next week on Raw, the night after Backlash. Why not just do the Draft after the European tour then?

Anyway back to last night’s Raw which emanated from glorious London! A befitting end to Melina’s time on Raw as she faced off against her most recent rival and quite possibly, her best rival, Beth Phoenix for the Women’s Championship.

This match was one that Melina can be extremely proud of, her final match on Raw and quite possibly one of the best Divas matches on Raw in 2009 so far. I think I’d go as far as to say it was even better than their Royal Rumble match. The chemistry these two have was one of the highlights of 2008 for many a Diva fan and it was on show tonight. Beth’s brute force countered by Melina’s agility and flexibility; from the outset there were some great, memorable spots throughout this match.

One thing I immediately noticed was Melina’s fantastic selling of the powerslam by Beth; being able to take the most simple of bumps and sell them well is something that some of the newer Divas have but Melina demonstrated here just how to take a bump and sell it well and it looked awesome. Then we saw some of that great flexibility we’ve seen from Melina in the past in her matches with Beth, as Beth almost contorts Melina’s whole body around her shoulders, reminiscent of their One Night Stand match last year. A very unique submission move and it was great that the fans got into it as Melina was seemingly out and the referee was starting to count her out. And now in shades of the Royal Rumble match, we again see Beth use Melina’s foot to club her over the head… ouch. But a true testament to what a great worker Melina is, her matches always have that extra flare and uniqueness.

Melina’s newest addition to her moveset, the handspring elbow could use some polishing judging the two occasions that I’ve seen it used, but the one legged drop kick into the split was again, another great unique move. I wonder if that could rival Gail’s leg jawbreaker? Melina’s bringing all her top moves out for her final night on Raw, we see the return of the hair smash from the top rope! This segues into the finish…

And here’s where things get interesting. Beth spears Rosa off the apron, which nicely sets up eventual friction between these two. I have no doubt we’ll be seeing a feud between Rosa and Beth in the near future, so it was great to see them start to build what could be Beth’s next feud. And for the first time in, well ever I think, Beth is pinned clean! Melina hits the Last Call with perfect precision for the three count and what a defining moment it is for her, she finally topples the Glamazon without having to resort to a shifty roll-up.

I’ve been saying it for ages, it’s about time Beth was pinned clean. She’s been doing the Glamazon shtick for two years now and has never really lost to a finishing move and it’s about time she did. I felt that Melina should have won using her finisher at the Royal Rumble to win the title but they opted for a roll-up there, which sucks. But at least we got definitive closure on this feud last night on Raw.

This match was really enjoyable, if you haven’t watched it, definitely seek it out. Beth is a great wrestler and all, but I honestly think Melina brings out the best in her because she’s able to use her flexibility and agility to help create new, unique situations that you wouldn’t see in a Beth-Candice match or a Beth-Mickie match. These two have had a great feud, probably one of my favourite Diva feuds in recent memory and I think the way it ended was perfect; all wrapped up with a bow on it.