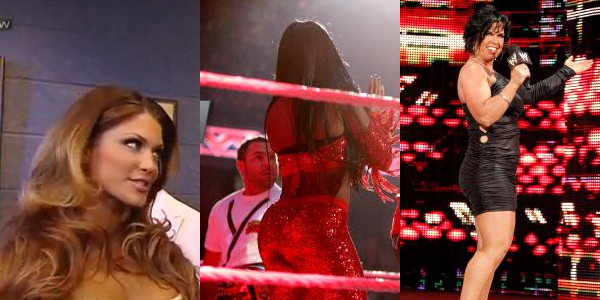 FINALLY!!!! That’s right, finally! Finally, your resident Khaleesi has come back to the Raw Redux after more than a month away. Wow. It’s been a while and I’m not terribly sure I remember how to write one of these things. Before we go any further, I want to thank Bobby for stepping up and filling in for me. Sometimes life and vacations get in the way and the fact he took on my Redux, along with his other DD responsibilities speaks volumes about his character and his personality. Bobby, you are a class act and I thank you very much for helping me out. I also forgive you for ruining my picture with Dolph Ziggler at Axxess not once, but twice. Ahhh, Miami memories.

So lets get started, shall we?

As I’m typing this, I haven’t watched Raw. I figured it was only fitting that my first Redux back is of the ‘live’ variety because let’s be honest, those are always the most fun anyway. I couldn’t tell you anything that happened, so I reckon now is the perfect time to cue up my YouTube and get this underway. As the wonderful Kim Zolciak once sang, don’t be tardy for the party! Read along with me NOW!

After what is an incredibly epic brawl (and according to Twitter the only Diva sighting of the night), Eve Torres approaches Big Johnny in the backstage area.

First let me say that Eve’s dress is amazing. She’s also incredibly beautiful in person. But seriously that dress: I want. Of course, I also need a body like that in order to wear said dress but a girl can dream. Nonetheless, Big Johnny is screaming at Teddy Long for his lack of control over John Cena, and once he sends the former GM away, Eve walks up and taps him on the shoulder. He snaps at her but when he realizes who she is, his tune changes. Eve points out that the two of them haven’t had a chance to talk since WrestleMania, but Johnny points out that right now things are a little hectic. He offers to make an appointment with the devilish Diva so they can talk one on one, but Eve counters that offer by telling Johnny that since he has her number, he should just call her. Johnny agrees and Eve leaves.

Clearly, Eve is going to want some kind of pay-off for helping Team Johnny win at WrestleMania. I can’t really say I blame her. She pretty much used her relationship with Zack Ryder in order to secure Team Raw the victory. I reckon a Divas Championship shot should come her way or something along those lines. Short segment and gives you hope that more is on its way. At least that’s how I’m taking it.

When Raw returns from commercial (assuming there was a commercial break seeing as how I’m watching on YouTube), Naomi and Cameron make their presence felt alongside Brodus Clay and Santino.

First, can  I just say that it was ridiculous for me to see how over Clay, Naomi, and Cameron are. At WrestleMania the crowd literally had a mental breakdown when they made an appearance. They were also at the Thursday night Axxess session and had a huge line. I didn’t get a chance to meet them but I’m incredibly jealous of all those people who did.

They get in the ring, do their thing, and after some heart wrenching highlights from last week that saw my love, Prince Dolph, get destroyed, Queen Vickie Guerrero makes her way to the stage. I have a feeling we’re about to have a tag match and I’m not thrilled about it. For the love of all things holy, can we elevate Prince Dolph back to the main event?

Oh yum, Prince Dolph got his hair did.

I’ll be honest, recapping this match is not really a priority. I’m including it for those of you who want to see Naomi, Cameron, and Vickie.

Did Prince Dolph seriously just get pinned?! Oh hell no. My face right now pretty much mimics Vickie’s. I’m not even joking. The Funkettes get in the ring and celebrate with Brodus and Santino, and can I just say that I thank God they didn’t do that stupid trombone thing that Santino does?! Well, I said it anyway.

What else can I say? I think I would have preferred to see Vickie try and get involved in this match in some capacity because perhaps that would have given Naomi and Cameron something else to do. I would love to see them try and interject themselves into Brodus’ matches especially when someone as evil as Vickie is on the other said. That said, I truly hope this is a one off thing. I’ll take a Dolph Ziggler loss if it means I never have to see him face Brodus and Santino again. Again, I’m not even joking on that.

That was about it for Raw. SmackDown seems to be the new home of the Divas so perhaps more will be done to advance storylines on the show tonight. I don’t really have much else to say. I wish my return to the Redux could have been more exciting but that’s just the way cookie crumbles sometimes. I hope you guys enjoyed this nonetheless. Until next time!