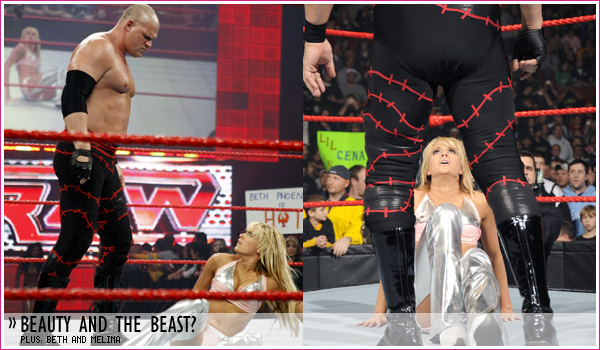 Well Raw was quite a mixed bag this week, let’s break it down and look at the different Diva aspects of the show:

Beauty and the Beast?
Last night, WWE began a brand new angle between Kane and Kelly Kelly. Looks like the Big Red Monster, like most men, has the hots for K2 and despite the segments coming off kind of weird and creepy, I quite liked it. It’s cool to see Kelly finally in an actual storyline and I think this whole Beauty and the Beast shtick could work well, with Kelly finally coming around and seeing something she likes in Kane. I’m looking forward to seeing this unfold in coming weeks. I have to say, I thought Kelly’s acting was pretty decent. Sure she’s not going to win an Emmy or Oscar, but by WWE standards, I think she did a good job. Especially when compared to some other Divas. Could you imagine Candice or Mickie in Kelly’s place? Kelly is developing in all facets of the industry.

The match
As for the match last night… say what?! So we get a new angle at the expense of the current one? Almost no interaction between Beth Phoenix and Melina. The match was standard fare, too short and not enough of what we really want to see though.

The curious case of the stalker fan
So Beth finally had some interaction with her ‘biggest fan’ (known to us as FCW’s Roucka). I still have no idea where this will go, it’s very interesting. WWE has done the stalker fan stuff before with Mickie and Trish but this time, they’re really developing it slowly by planting Roucka in the audience, Mickie just turned up out of the blue on Raw. I had my own theory about this storyline: Roucka started showing up at the same time as Melina returned. I think it could be cool if Milena turned out to be Melina’s sister and eventually costs Beth the title in a match with Melina. The two look quite similar and I guess they could call her Milena to tie in her being Melina’s sister. It’d be a nice twist to the whole fan thing that we’ve seen many times before.