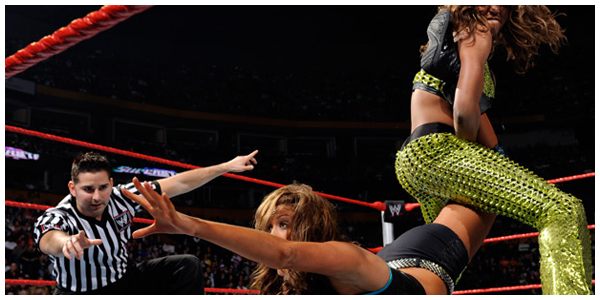 Another week, another Raw Divas match on WWE Superstars. This week, we’ve got another tag team match: Eve Torres and Kelly Kelly vs. Alicia Fox and Katie Lea. Can Katie Lea score her first win in quite a while, or will the flashy faces prevail? Watch the match below:

Alicia and Eve start the match with a tie-up, Alicia taking control and turning a side headlock into a hip toss. She holds the headlock on Eve, despite her fight for momentum. Alicia eventually gets to her feet and is shoved away by Eve. Alicia bounces off the ropes and shoulder-blocks and attack by Eve, laying her out. Alicia goes for an attack of her own off the ropes, but is hit with a dropkick from Eve.

Alicia spazzes out a bit (overselling the dropkick much?) while frantically trying to get to her corner to tag in Katie Lea. Katie comes in and locks Eve in a belly-to-back hold that she eventually gets out of, twisting one of Katie’s arms and tagging in Kelly. She then hits Katie with a snapmare by the arm, allowing her and Kelly to hit a doubleteam on her. Kelly goes for he pin, and gets a 1-count. Kelly brings Katie to her feet, but Katie immediately lifts her up (I always call Kelly the “rag doll”, but this is too literal!) and carries her to her corner, smashing her back-first into the turnbuckle.

She goes for an attack but Kelly blocks it, nailing Alicia and then Katie again. Alicia gets another elbow to the face and Kelly dodges a charge from Katie. She hits an arm drag, wrenching Katie’s arm and tagging in Eve. Eve climbs the turnbuckle, hitting a sunset flip onto Katie and rolling her into a pin, getting a 2-count. She hits Katie with a few forearms (or pats to the cheek.. they were so light they might as well have been) before having an irish-whip reversed on her. She comes off the ropes and kicks a crouched Katie, hitting a clothesline and then her somersault splash. She attemps a pin, but the referee checks Katie’s shoulders and she kicks out before he can even get down a 1-count.

Both Divas get to their feet, Katie taking refuge in the corner. Eve advances towards her but is kicked in the face. Katie goes for an attack but Eve hoists her up into a fireman’s carry, falling back and sandwiching Katie onto the mat (my God.. I don’t think I’ve seen that move since the last time I played a wrestling video game, which has been yearsss). She climbs the turnbuckle, prepping for a moonsault, but Alicia shakes the ropes, making her lose her footing. Eve doesn’t fall, though, but climbs back down. She grabs Alicia by the hair, and is pulled over the ropes, Katie Lea shoving her over for the last bit. On the outside, Alicia kicks her before Katie comes out and tosses her back into the ring, slamming her knee on the corner of the ring apron.

Katie continues her assault on Eve’s knee and goes for a pin, getting a 2-count. She drags Eve by her bum knee to her corner, tagging in Alicia. Alicia slams her bad leg against the mat, stopping Eve’s crawl to her corner with a well-placed knee to her back. She locks her into a half Boston crab, focusing on the bad knee. Eve crawls towards the other side of the ring, almost reaching the ropes but Alicia releases the move before she can, striking her on the back, dragging her away from the ropes, and trying to lock in the move once more. However, before she can, Eve kicks her away with both feet, catapulting her off the ropes and across the ring. Before Alicia can gain her bearings, she tags in Kelly.

Kelly comes in with a slight variant of what I’ve dubbed the Kelly Kelly Offense™, consisting of two clotheslines and a whirly bird hurricanrana. She also hits her handspring attack into the corner, though for a second I thought Alicia overzealous selling was actually a counter. It wasn’t until she hit the mat that I figured that her forward thrust was meant to make sure Kelly made contact. Maybe Kelly slipped an industrial strength magnet into Alicia’s top and planted the other into her own back? That’d be a sneaky move, sis.

Kelly hits a frankensteiner (I got all of ’em! Bingo!!!) and hooks Alicia’s leg into a pin. Katie busts in, breaking up the pin and prompting Eve to come to Kelly’s defense, but she’s halted with a kick by Katie. Kelly attacks Katie from behind, her surgically implanted magnet somehow prompting Katie to go flying out of the ring. Alicia goes to attack Kelly in the corner, but she’s met with a kick. Kelly hits a splash from the top rope and goes for the pin, but Alicia keeps her momentum rolling into a pin of her own. She holds Kelly tight and gets the 3-count and the win for her team.

Reading the spoilers, I was absolutely shocked to see Katie Lea actually get the win, but with Alicia getting the pin it makes a bit more sense. Still, Katie got a lot of licks in on Eve and worked her slow-paced pretty well in aiding to Eve’s knee troubles. Alicia built on that in a great way with her submission and showed some good heel characteristics in seemingly just punishing Eve. SI have to say, though, that she needs to pull it back a bit in terms of selling–there were so many instances in this match where she ruined the illusion of the moves by practically jumping into the attack or flying around after a simple dropkick. She’s a great heel, like I’ve said, but she’s best on offense and obviously needs to work on her defense, especially given how much selling heels need to do.

Speaking of selling, Eve’s become a pro at that. She can take the punishment well, and her flashy moves as as flashy as always, but she’s proven a lack of talent in the basics, her simple attacks (like the forearms) looking feeble and weak. It just further proves that she (and her trainers) need to not worry about how many flips he can do in a match and make sure she can believable fill in the blanks of the match with some actual story and groundwork. Without it, she’s nothing but flashes of nonsensical color. Kelly’s already far beyond the point of no return, having become little more than flashy moves. There’s just not much substance to what she does, and while she does the hurricanranas and frankensteiners well, it just gets tiresome to see them in every single match, almost in the same sequence each time. This kind of predictability isn’t entertaining.

The match was alright, if suffering from shoddy selling and some predictable offense. From reports that the match was “really sloppy”, I was expecting much worse. But the match in itself wasn’t too horrible–or predictable, for that matter–after all, the heels actually got the win. We all know that in these types of matches, the babyfaces usually go over. It was even more surprising to see Katie Lea on the winner’s side, mostly because of how she’s become a second thought to the bookers. It obviously would be a different story if someone like Jillian was her partner (which last week proved). Alicia or no Alicia, I’m glad to see some different Divas tasting victory. It may not come often for Katie, but it’s still pretty sweet, no?

Food for thought: Do you think Katie Lea will ever be in the limelight again?