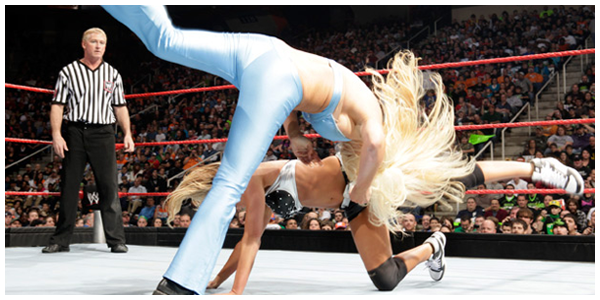 Last week’s Superstars Mixed Tag match didn’t exactly set the world on fire, and I expressed hope that the WWE would use this program to showcase a weekly Divas match, preferably one-on-one. Well, this week brings hope that they might actually be heading in that direction, as we’ve got Kelly Kelly taking on Jillian in a singles match. It’s certainly a different Diva combination from we’ve seen lately, so I’m interested in seeing how they’ll work together–will it be good, bad, horrific? Check out the match below and find out for yourself:

Jillian makes her way to the ring, and proceeds to tell the audience about how she had felt nervous about tonight until she heard a Miley Cyrus song on the radio, that song being “Party in the USA”, which I believe is the only song in the history of music whose Kidz Bop cover sounds better (not that I’ve listened to either voluntarily.. *cough*). Jillian butchers the song, and the crowd boos her within an inch of her life. It’s weird, but I think Miley got the biggest heat the WWE’s seen in a while. Maybe they can channel that into a shitty impersonation by Santino.

Kelly interrupts the singing, getting a rather large pop. She enters the ring, and the match begins with a tie-up, Jillian immediately nailing Kelly with a knee to her stomach. She wrenches Kelly’s arm, prompting her to head to the corner and climb the turnbuckle, hitting a sitdown flip off the top rope and sending Jillian flying with the resulting armdrag. Kelly keeps the momentum going, hitting a frankensteiner and hooking Jillian’s leg for a 2-count.

She pounds Jillian’s head a bit, then attempting a kick that Jillian blocks, catching her leg. Kelly does a backwards flip to escape, but once back on her feet Jillian takes her down with a clothesline. Talk about a spinning head.. Jillian attempts a pin, getting 2. She picks Kelly up by the hair, shaking her head violently. She continues with the hair-driven attacks, tossing Kelly across the ring by her blonde locks. With the popularity of weaves amongst the Divas you’d think those types of moves would be outlawed, a la the shooting star press from a while back. Hey, it is dangerous–exposing fake hair counts as breaking kayfabe!!

Jillian meanders over and attempts another pin, supposedly thinking that a throbbing scalp was too much for Kelly to bear. Kelly valiantly kicks out. Jillian, knee in Kelly’s back, grabs her arms and bends them back, wrenching her shoulders. Jillian eventually relents and goes for another pin, getting 2 again. Maybe Kelly will just tire of getting pinned and eventually stay down for the 3-count. Ah, I think I’ve figured out Jillian’s strategy!

Frustrated, Jillian pounds Kelly’s head on the mat and locks her back into the arm/back submission hold. Kelly does a good job of selling the pain (this would be an instance where her screaming adds instead of detracts from the match). Kelly fights free, finding the strength to toss Jillian over her head by her arms. She then blocks an attack from her with two boots (er, or skater shoes..) to the stomach. She goes on the Kelly Kelly Offensive Streak™, hitting her requisite clotheslines and hurricanrana that would be so easy to telegraph if her opponent thought about it for 2 seconds. Jillian dodges a corner attack, but then gets an elbow to the face when she tries for one of her own. Kelly climbs the turnbuckle and grabs Jillian, climbing on her shoulders like they’re prepping for a game of chicken.

She bellows out a jagged scream (it is the end of the match, after all.. a girl’s voice gets hoarse) before flipping forward to hit the modified frankensteiner. However, Jillian blocks her forward momentum, turning it into a pin. Kelly kicks out at 2. Jillian sends Kelly into a corner, attempting her handspring elbow but getting a kick in the back from Kelly instead, falling to the mat. Kelly takes advantage of Jillian’s crouched and hits the K2, getting the pin and the win.

I could be wrong, but this match felt much longer than the other Divas matches we’ve seen lately. I think that’s one of the perks of having matches on Superstars, and that’s why I’m hoping this weekly trend of Divas matches will continue. It’s perfect for them to hone their skills and put on matches that aren’t necessarily tied to the feuds on Raw or SmackDown. For now it’s most been Raw girls getting the Superstars spot, but I’m sure SmackDown will get in on the fun eventually. But for now, it’s nice to see that the neglected Raw Divas have a spot to wrestle.

The match was certainly decent and interesting in that we haven’t seen Kelly and Jillian face off as many times as we’ve seen the other girls go at it. It certainly made me more interested in seeing the match. Though, it probably suffered from a bit of a styles clash–Kelly’s fast-paced style clashing with Jillian’s rather slow and labored move-set. Kelly, as always, wrestled predictably, but Jillian was able to halt it a bit and change it up, latching her into a rather convincing-looking submission hold and in general seeming pretty aggressive despite her slow in-ring movement. For two Divas who haven’t had much one-on-one interaction Jillian and Kelly worked well together. Jillian, with her 20,000 pin attempts per match, comes across as a business-like heel who just wants to win, no matter the cost or considerable lack of flair. For all her silliness pre-match, Jillian has another, more serious side during her matches, and that was showcased here.

Jillian provides a good foil for Kelly’s flashy moves and fan adoration, able to use Kelly to her full potential as a rag doll with her head-bashing moves and submissions. Well, maybe Beth, with her strength, could toss around rag doll Kelly a bit better, but Jillian uses what she’s got and does well with it.. Perhaps if this were to be extended into an actual feud, Jillian could become even more aggressive in the ring and give Kelly the evil heel she needs to milk the sympathy out of the fans and get them interested and emotionally invested in the match.

I’d still love to see Kelly branch out a bit with her moves–not just 20 variations of a hurricanrana–and show that she can actually wrestle, not just go through the same motions each match, screaming all the while. The same goes for Jillian–we all know she can wrestle, but she seems to be playing it safe a bit with these grounded moves. Both need to break out of their constraints and show the fans what they can really do. That is, if they can really do it.