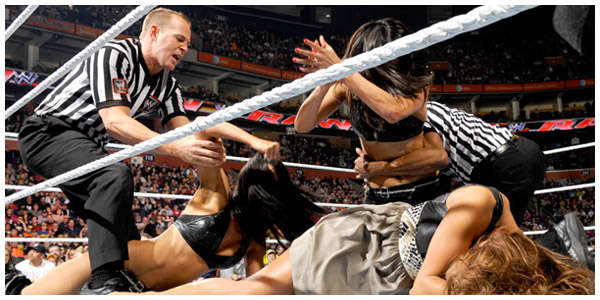 After picking up a surprising win over the Divas Champion, Eve, one might think The Bella Twins were in line for a title shot, right? Wrong. On this week’s edition on Raw, The Bellas along with Maryse, Tamina, Alicia Fox, Gail Kim and Natalya take part in a Diva Battle Royal for #1 contendership. Can The Bellas strike gold again and net themselves a shot at the strap or will some other lucky Diva come out on top? Check out the match below:

We kick things off with the champion, Eve, on commentary expressing her thought on the battle royal and facing off with the winner. The official signals for the bell and it’s every woman for themselves. Right off the bat, Natalya grabs Brie Bella and tosses her out of ring, eliminating her. Alicia follows her soon after, also eliminated by Natalya. Meanwhile, Melina knocks Tamina out of the running with a stiff kick to the head.

While Nikki Bella and Gail Kim battle in one corner, Maryse and Melina try to team up to take out Natalya. Nattie manages to fend off Maryse and flips Melina onto the apron after her failed attempt at an heel kick. Nattie tries to follow up with a shoulder block, but finds her herself on the apron as well when Melina evade. The former champion scuffle for a bit on the outside, before Maryse charges them and scores a double elimination.

With only three Divas left, Nikki and Maryse focus their efforts on Gail, shooting her into the corner. Nikki charges in with a clothesline, but Gail Kim dodges and lets loose on Maryse with an elbow followed by a sick dropkick. While Maryse is down, Nikki goes after Gail again, but get leveled with a neckbreaker for her troubles. Before Gail can do any more damage, Maryse hits her with a kick to the gut and slams her to the mat by the hair. Maryse picks Gail up and goes for the French Kiss, but Gail reverses it and pulls her out of the ring, leaving us with Nikki Bella and Gail still in the running to become #1 contender.

After being eliminated, Maryse flips out and has to be restrained by both of the officials. While the referees are distracted, Gail eliminates Nikki, but Brie, who has been hiding under the ring the whole time, creeps back into the ring and gets the jump on Gail. Gail tries her best to eliminate Brie, but Bella #1 gets the better of her and nabs #1 contendership.

In the meantime, Eve saw what really when down and rushes the ring to protest. While she’s pleading her case the Bellas jump her and beat her down… again. When all was said and done, The Bellas had be pulled off of the champ and Eve looked a bit like this. Poor Eve… she just can’t get a break.

All in all, I wasn’t too impressed with the match. Five girls eliminated before the minute mark? That’s just sad, even for WWE. What I did like was more storyline progression between Eve and The Bellas. With Brie Bella winning the match, even though Nikki was supposed to be the legal, I wonder what kind of twist they’ll put on the eventual title match. Furthermore, if Brie does manage to win the title, will we have another Lay-Cool on our hands?

Even though I didn’t like the actual match, I really like where the WWE is going with the Bellas. Hopefully, this story this feud can get a bit more direction next week and we’ll have a solid storyline going into WrestleMania, if indeed that’s where this is going (which it probably isn’t).