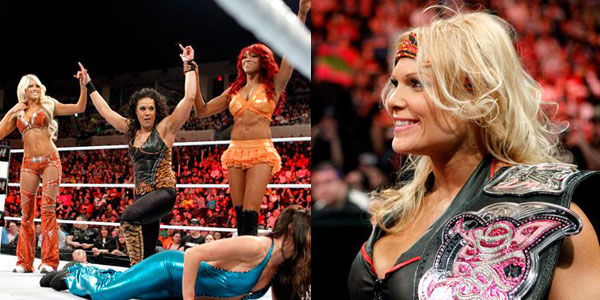 Welcome, everyone, to another chilling, thrilling Raw Redux!~ Unfortunately Cryssi’s work schedule has taken it’s blasted toll, and therefore, I am here to take over in what was a pretty interesting night for the ladies of Raw. We had a rematch from the Royal Rumble which saw Tamina, Kelly Kelly, Eve, and Alicia Fox take on Brie & Nikki Bella, Natalya, and our reigning Divas Champion, Beth Phoenix! Resident Pocket Rocket, AJ, also accompanied Daniel Bryan to the ring for his ten millionth match against the Big Show, and Eve closed the show in a haunting segment with Kane backstage.

Without any further ado, let us kick off this Raw Redux with some action.

We head to the ring, where Justin Roberts announces the following 8-Diva tag team match, and since there are only eight Divas that WWE regularly uses on TV programming, I think it’s safe to assume who is involved. Nonetheless, “She Looks Good to Me” starts up, and out walks Alicia Fox, Tamina, Kelly Kelly, and Eve! As the four Divas strut into the ring, we get a video recap of last week’s antics involving Kane, Eve, and John Cena before heading back to the classy tune of our Glamazon’s theme. Natalya and the Bellas step out to the ramp by her side, and together the four ladies hop into the squared circle as we get a nice video recap of Beth Phoenix saying there’s no competition for her. Could WWE truly be building to Beth vs. Kharma?!

The bell sounds, and hey, we’re already two minutes and thirty three seconds into this video which on any given night, is the time given to their entire segment. Progress is being made! Nonetheless, the bell sounds as Eve and Beth start things off for their teams. Eve goes for a headlock, but Beth sends her off the ropes and Eve beautifully glides off the Glamazon’s back. She goes for a kick, but Beth DRILLS her in the face with the soon-to-be infamous clothesline that has since possibly broken Eve’s nose. She goes for a cover, but Torres kicks out and Beth bodyslams her before viciously striking Brie Bella in the chest and ordering her to show the Glamazon what she can do in the ring. I have to say, I’m absolutely loving this new version of Beth where she bosses people around “her” ring!

Brie walks into the ring and drops Eve with a neckbreaker, before slamming her head into the canvas and asking Beth what she thinks about that?! Suddenly, we see Nikki Bella scream out, “BRIANNNAAAAA” like any good twin would do, as Brie turns around and gets dropped with a Samoan Drop by our Warrior Princess, Tamina. Nikki hilariously shrieks for Tamina to “leave her alone”, but Tamina refuses to listen and heads to the top rope. Nikki B starts to walk over towards her, but Kelly and Alicia Fox take her off the apron and to the floor. Tamina then proceeds to set up for it… and yes, Superfly Splash connects as Tamina picks up the win for her team. She and Beth then exchange glares towards one another, as the Glamazon seems pleased with Tamina…hmm.

Later on in the night following Chris Jericho’s victory in a six pack challenge, we begin to hear a loud female scream that I assume is a fan with a loud voice, until the camera suddenly cuts backstage to see that it is none other than Eve Torres! She cowers in fear, as Kane walks into her dressing room and proclaims that he can’t stand the hate pouring out of his soul. He continues that John Cena is beginning to embrace the hate, but that he’s not all the way there yet. Kane proclaims that when Cena embraces the hate, he will be in a better place but that if he doesn’t get there soon, he fears for Eve, Cena, or anyone that steps in his path. From there, Kane ends that for the first time in his life, he is afraid of himself! Eve cries in fear, as our horror movie saga comes to a brilliant end for this week.

Also, check out the phenomenal duo that is Daniel Bryan and AJ, as she joins him at ringside for his match against the Big Show:

Thoughts: Pretty unique show tonight. The 8-Diva tag was what it was, in that they still didn’t get a good amount of ring time, however I like that nobody got a commercial entrance. It’s also very intriguing to me that we got to see a recap of the WWE.com segment featuring Beth because we all know the website posts numerous segments involving the women that never translate to TV. I refuse to believe WWE is considering Kharma vs. Beth for ‘Mania because it’s always a let down in terms of booking. The only way I can see it happening is if the dreaded lumberjill stipulation makes its ungodly return, however, they really are building Beth up as this dominant force and I honestly love it. She’s becoming more entertaining to me because she is getting to show some character such as ordering the other females to impress her or get out of her ring. It’s planting the seeds for WrestleMania and I can not wait.

It also looks as if Tamina could be the challenger to Beth heading into the Elimination Chamber, which is pretty interesting considering I remember recapping her and JTG every week on NXT just a few months ago. It’s very weird seeing them actually utilize someone that’s not Kelly or Eve, and while Tamina isn’t everyone’s favorite, she’s one of mine because she is so unique in every way possible. I like that she isn’t cookie cutter, and yes, she’s not the greatest wrestler in the ring, but she and Natalya had a great outing on Superstars, therefore I have no doubt she and Beth could do the same on a pay per view. I’m assuming she is going to be used solely to bide time for Kharma’s complete return heading into ‘Mania, which is fine with me and it provides us with a fresh match that we have never seen before.

Eve’s segment with Kane was killer as well. I love that she is getting so much exposure on Raw with the top caliber stars, and tonight was the icing on the cake in that she actually got to close the show. You had Chris Jericho win a six pack challenge in the main event, and he is interrupted by a segment involving Eve… now that is phenomenal. (Note from Melanie: Backstage segments are pre-taped before the live show, so that’s why Eve looks fine here. The segment was recorded before her injury in the Divas match.)

AJ and Daniel Bryan work so well together too, it’s unbelievable. She plays the victim to a T, and he is the perfect person to work off of because he knows wrestling so well and is able to add in little quirks such as never saying he loves her back, and constantly persuading her to accompany him to the ring and use her to his advantage. I always wanted WWE to incorporate the females into male storylines, and judging from tonight, Eve and AJ are playing key roles on TV and I approve!