Raw Redux (February 7th, 2010): Settle Your Kettle, Michael Cole, Because Natalya’s Whistle is About to Blow! 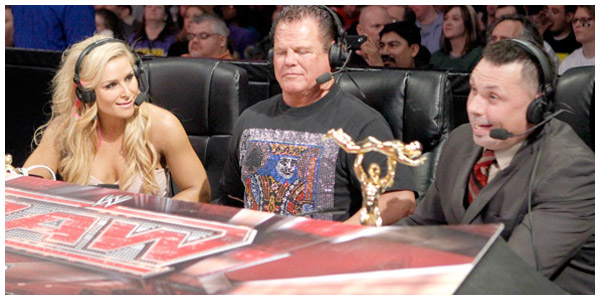 On this week’s edition of Raw, WWE gave us yet another tag team match, this time featuring Tamina, Gail Kim and Divas Champion Eve against Melina and The Bella Twins. As an added treat, we got the #1 Contender, Natalya as a special guest commentary. Can Eve pick up her first as the newly crowned champ? Check out the match below and find out:

First out is the babyface team and I can’t take my eyes off Tamina’s gear… but I wish I could. Melina and The Bella Twins are out next, and strangely enough they get separate entrances. I guess WWE were gracious enough to spare a couple of extra seconds for the Divas tonight. We are not worthy.

While Natalya and Cole snipe at each other over the announce table, the match gets underway inside the ring. The Bella Twins use the numbers game to distract Gail, leading to her getting slammed to the mat with a vicious hair pull from Bella #1. Bella #1 pummels Gail with a few kicks, before slamming to the mat once again and dragging her to her team’s corner. Bella #2 tags in and they take Gail down with an effective team maneuver. Bella #2 stomps Gail out for bit and chokes her over the middle rope, before dragging her back to her the corner to tag in Melina.

Melina comes in like a house of fire, landing a couple of stiff forearms to Gail’s midsection. She follows up with a snapmare into a modified surfboard submission. Gail manages to fight her way out of the hold, but Melina sends her reeling with a axe kick to the top of the head out of the corner. Melina comes striding across the ring like she owns it, only to get laid out with a flying clothesline from Gail, sending them both down to the mat.

Gail finally crawls her way to her corner of the ring and tags in the champion, Eve. Eve comes in and lays Melina out with a flurry of strikes, followed by her patented standing moonsault. The champion goes for the pin, but the broke is broken up by a Bella. Before they can do any more damage, Tamina and Gail take both Bellas out, causing a fight on the outside of the ring. Meanwhile, Melina tries to capitalize on the distraction, but Eve reverses into a impressive corkscrew neckbreaker, picking up the win for her team.

I know a lot of people weren’t too impressed with this match, I actually enjoyed it. While it lacked the spark of last week’s tag match, it was still a decent match-up. Surprisingly enough, I felt that The Bella Twins were actually the stars of this match. I’ve been enjoying their storyline with Gail and I really think they come off a lot better in the ring as heels. This heel turn may be just they thing they need to finally come into their own.

Another aspect of the match of the match that I really enjoyed was the not-so-friendly banter between Cole and Natalya. While I may not be a faithful Cole Miner, I thought he did a great job of antagonizing Nattie, while still keeping the focus on the match in the ring, as well as the championship match coming up next week. I’ve said before that Natalya isn’t always the best on the mic, but she really held her own this week AND she managed not to punch Cole square in the nuts, which is a feat in and of itself.

All in all, a solid night on Raw, in my opinion. I’m really curious to find out what will happen in this title match next week and see how it effect Eve and Natalya’s relationship. I’m also anxious to see if we’ll get another Bella/Gail catfight. Hopefully, WWE can keep delivering some quality material leading into WrestleMania.