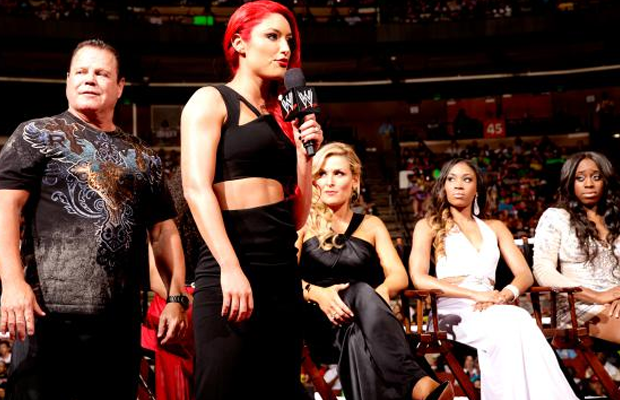 Okay so we all know that this week is Total Divas week, officially or unoffically… whatever. And last night, the WWE decided to indulge us and introduce us to the cast via a segment on Miz TV. Naomi, Cameron, Brie and Nikki Bella, Jo-Jo, and Eva Marie were all given the spotlight, but perhaps it was the flaming red-headed vixen we’ve seen cause trouble on the previews that stole the spotlight from everyone! Lets take a look at what went down when Jerry “The King” Lawler was brought into the situation.

Like seriously, Eva Marie. Talk about finding a way to get everyone to talk about you! This girl doesn’t seem like the type to play around, and I am more than okay with that. We all know how Lawler is when it comes to a pretty face, and Eva Marie made it more than clear she wasn’t going to put up with his wandering eyes! Now if John Cena had been in the ring… well that might have led to a different outcome. We’ve already seen one of the Total Divas sneak peak that Eva Marie is the type of woman who won’t hesitate to do whatever it takes to make it! Sunday’s premiere is going to be amazing! I can’t wait to see more.

Something I didn’t necessarily need to see more of was the ongoing drama between Dolph Ziggler, Big E. and our Divas Champion, AJ Lee. YES AJ!!! YOU ARE THE DIVAS CHAMPION! Quit being such a clingy ex and start worrying about your title! Never mind the fact that if Prince Dawlf was my ex, I would be a bit pyscho too. Never mind the fact I would cling to every single moment we shared together and do whatever I could to keep myself in his line of vision. Okay… so just ignore me. Keep doing the crazy, girl.

The only possible thing that concerns me now is the championship taking a back seat. I’m choosing to believe they had something else planned with Kaitlyn, but that had to take a backseat for a bit while Kaitlyn is off television. Either way, SummerSlam is coming up soon, and there needs to be a plan! Maybe instead of worrying about Brad Maddox and the McMahons, Stephanie McMahon could do something about our distracted little champion?

I don’t know what’s going with the McMahons or what this story is even going to turn into. I’m done trying to figure out what that clan is up too because at the end of the day you ever really know! And with the lack of action last night, I’m just going to go ahead and post a video featuring Summer Rae and Fandango. If for nothing else, Summer probably had on my favorite outfit so far last night.

That about sums it up folks. Not the best night for the Divas, but an awesome teaser at the type of character Eva Marie is. I cannot wait to see more of her! Until next time… Cryssi out!