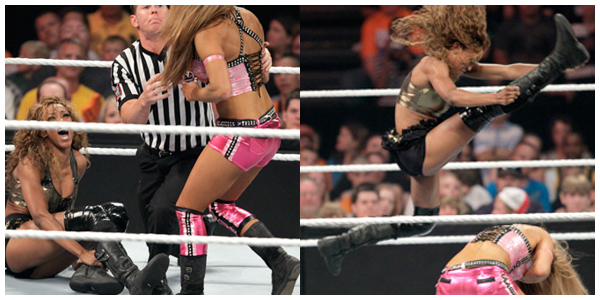 Note from Melanie: Erin and I are excited to promote Steven to the regular position of Raw columnist. We hope you’ll enjoy his Raw Redux, as with Erin’s, every Tuesday. Congrats to Steven!

After losing her Divas Title in controversial fashion two weeks ago at Fatal 4-Way, Eve Torres finally got her chance to cash in her rematch clause on this week’s Raw. But before that we’re treated to back to back promos from Tamina (and those atypical Samoans) and the Divas Champion, Alicia Fox.

Tamina basically busts some knowledge on Josh Mathews (and the rest of us at home), helping him figure out which Uso twin is which. While Tamina may be the strongest on the mic in her stable, I always get the feeling that she’s trying too hard. I know she’s trying to be the super tough heel Diva, but it can come off a bit forced at times. Hopefully, this will improve as she gets more comfortable on the mic.

On the other hand, I thought Alicia came off great in her promo. She pretty much gets on Josh’s case about not interviewing her, despite her being the new champion. She then lets all the viewers know that her win at Fatal 4-Way was no fluke and she’ll prove it in the ring with Eve. She then struts off to the ring as we go to commercial break.

By letting Alicia cut this promo, WWE is giving the audience a sense of Alicia as a character and judging by the heat she was getting during her rant, I’d say it’s working.

We come back from commercial to find Alicia already in the ring, stroking and kissing her precious title. In my opinion, the match had already hit a sour note. If anyone should get a full entrance, shouldn’t it be the champion? I bet they wouldn’t do that to John Cena…

Out next is Eve, sporting some new pink gear and looking perky as always. She takes some time to pose for the masses before the match gets underway. I would think she’d be a bit more focused given that this may be her last shot at the title for a while, but that’s just me.

The two ladies start off with a tie-up, but Alicia quickly gets the upper hand, nailing Eve with an elbow followed by a couple of stiff forearms. The champ whips Eve off the ropes, who counters by rolling over Alicia’s back and hitting a flurry of her own for a two count. Eve wastes no time getting back on offense, muscling Alicia into the corner and throwing her across the ring with a biel… and then things get scary.

Immediately after taking the bump, Alicia goes straight for ankle, screaming at the top of her lungs. Eve tries to keep the heat on the champ but the ref pulls her off of a visibly upset Alicia. Alicia manages to hobble to the corner while the referee asks her if she wants to continue.

Alicia insists on finishing the match, so the ref lets Eve loose. Sensing an opportunity Eve comes charging into the corner and gets a kneestrike to the face from Alicia for her trouble. While Eve is recuperating, Alicia comes sprinting out of the corner like Flo Jo (Surprise!) and hits her patented Axe Kick for the win. On her way back to the back, she even mocks the crowd with some faux limping.

If you tuned into Raw for some quality Diva wrestling, you obviously came to the wrong place. The match couldn’t have lasted two minutes bell to bell, and the wrestling that did take place wasn’t exactly mindblowing. On the upside, what this match lacked in action, it made up for in character development.

Alicia got to build some character both in and out of the ring. She even got to show off some primo acting skills. I don’t know about everyone else, but I was convinced she was actually injured. Her fake injury not only netted her a win but also got her some heat from the crowd, which is exactly what she needs as Raw’s top heel Diva.

As I said on the Post-Raw Show, this felt very much like a blow off match for Alicia and Eve, which makes me wonder: Where do we go from here? With Maryse (who apparent loves money) teamed up Ted DiBiase Jr and Eve losing her rematch, it seems as if there’s no clear contender for the Divas Title. Maybe it’s time for that Gail/Alicia feud we’ve all been itching for? (Make it happen, Erin)

Also, former Divas champion Maryse made her presence known during Ted DiBiase’s match against John Morrison, blessing us with her input on commentary:

Maryse managed to detract all attention away from this match with her unique brand of commentary, including calling Cole out (as always) and taking a phone call… in French! Vintage Maryse!!! She even gets involved in the match by jacking JoMo’s jacket and distracting him long enough for her charge to pick up the win. It’s good to see Maryse using her charisma to stay in the spotlight, despite being out of the title picture for now. I’ve said before that wrestling is not Maryse’s strong suit, so this role is a perfect fit for her. I have a feeling that Maryse will end up outshining Teddy Jr. when all is said and done between them.

All in all, it was a middle of the road for Raw this week. the in-ring action just wasn’t there, but some decent mic work from Alicia, Tamina and Maryse saved what could have been an abysmal night for the Divas. WWE really needs to step it up next week if they want to get the fans caring about Raw’s Divas division. Sorry to say, but two minute matches just ain’t cutting it anymore.