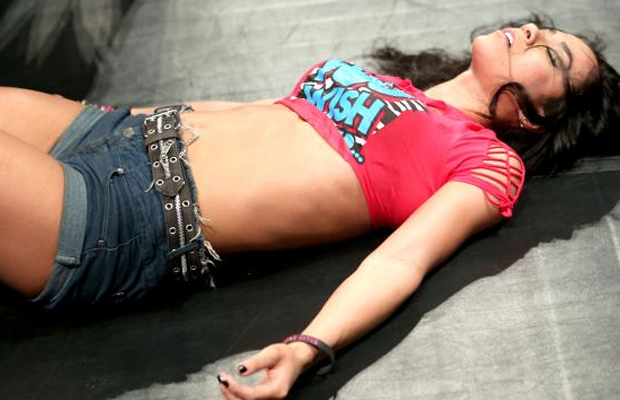 GUESS WHO TOOK ME BACK?!

That’s right, readers! Raw has taken me back, forgiven my infidelty, and we are more in love than ever. I know some of you were hoping Raw would kick me to the curb, but lets be honest shall we, Raw would never ever get rid of the best thing that’s ever happened to it. Stay pressed, haters. Strap in and get ready for another Redux, brought to you by yours truly. You know, your resident Khaleesi who you all love and secretly worship, and wish you could be.

Immaturity aside, or perhaps keeping with a theme, last week we had another segment featuring our champ, AJ Lee, moonlighting as a mean girl rather than a Geek goddess. Once again, she body-shamed Kaitlyn and tried to humilate her. And yes, for absolutely no reason at all, Layla was at the side of Kaitlyn still pretending to be her BFF. I’m sorry, but I really can’t take Layla as a supportive, bestie face character. Regardless, shenanigans continued on SmackDown with AJ costing Kaitlyn a win against Alicia Fox, and tonight I’m sure we will be seeing even more high school drama, because after all, this is WWE High School. Money In The Bank is this upcoming Sunday, where the rematch will happen, so what will happen?

To be honest, I’m not sure. I’m watching live tonight. And it looks like Queen Vickie Guerrero is going to start us off tonight!

Queen Vickie, along with luscious Brad Maddox (personally, I don’t get it but Twitter seems too so I’m going for a cheap pop here), are standing in the ring along with a ladder and referee Charles Robinson. Vickie lets us know that she has been dilligently working on Sunday’s big pay-per-view and runs down the historical meaning of the ladder. She also name drops a few of the company’s top stars who’ve been involved, and includes Triple H. Perhaps trying to score some points, Queen? Vickie dramatically pauses and begins to make her way up the ladder, much to my shock. Once she positions herself on the top, she takes the microphone and begins to put herself and the job she’s done as Raw GM. As Vickie is going on about her greatness, Jerry Lawler stands up and interrupts her for absolutely no reason that we, the smart fans, actually give a crap about. He says that the McMahons have just informed that they will include all factors into Vickie’s evaluation tonight, including the opinion of the WWE Universe. Apparently, there is a poll, and Lawler urges the fans to vote. Vickie fakes being alright with this, and does a little booty smooching to the crowd. She says that she considers them like family, and like all good families, they have good and bad days. Vickie continues on by saying that at the end of the day, all families have one anothers’ backs, and that her relationship with the WWE Universe is no different.

Brad Maddox shows off his usefullness by giving the Queen a thumbs up. At least he’s good at something other than fashion.

Vickie says that she has a heck of a show planned tonight. John Cena will face off with Mark Henry, and all the Money in the Bank participants will be in action with one another tonight. BB Christian will take on Kane, while Randy Boreton takes on CM Punk. And up now, Daniel Bryan, slaying all of us with his perfection, will take on my ex-boyfriend, Sheamus. WRESTLING!!!!

As I’m writing this live, here are a few thoughts. One, if they are using the WWE Universe as part of Vickie’s evaluation, then she is being set up to fail. Two, what a way to kick off Raw. Anything that other show can do, Raw can do better. And perhaps that is my bias talking because we are in a relationship, but regardless… Vickie was ridiculously fierce climbing that ladder in those sexy nude pumps. She’s totally my spirit animal, and if she ever gets taken off television, I might just cry. She brings such a unique element to everything she does, but I do realize that this is storyline orienated. And judging from a purely storyline perspective, she’s put together a heck of a show so far. Yay for Sheamus and Daniel Bryan.

I love Daniel Bryan. I love wrestling, actual wrestling. I even own indy DVDs. So surely, that should answer any question as to if I even actually like wrestling ;-)

I also stan for sports entertainment as you all know and AJ Lee and Big E. Langston are now backstage.

AJ is telling Big E. that he kinda, sorta needs to watch her back tonight. She tells him that if he gets any inkling that Kaitlyn is getting close to them, or if he hears her, he needs to let her know. Langston basically laughs at the champ, because she is being a bit paranoid (not that she hasn’t brought it all on herself), and as their conversation continues our beloved Prince Dawlf shows up. AJ squeals like a tween at a One Direction concert and wraps her arms around her love. Prince Dawlf dismisses Langston, saying he wants to have a private word with AJ. He’s not impressed with her priorities at the moment, and says she is far to focused on Kaitlyn. Prince Dawlf reminds her that they had a plan, and it was to become the power couple of the WWE. He wants her to remember that, and AJ bats her eyes, and assures him that she does. She strokes his ego and Prince Dawlf declares that after Sunday he will be a three-time World Heavyweight Champion. The couple seal their promise to one another with a kiss, and we fade out.

I kind of want to throw up but I assure anything negative I have to say about that segment is purely out of spite and jealousy. I think there is tension between the two, at least on Ziggler’s end with AJ. And I do believe it’s going to come to a head sooner rather than later. What direction they end up going in, I couldn’t even begin to predict. But what I would like to see happen is AJ dumping Dawlf on Sunday should he fail to defeat Alberto Del Rio.

First of all, you’re welcome for showing Saint Tyler and Roman Reigns. Surely that scores me some points, doesn’t it?

Secondly, Naomi and Cameron really need to branch off on their own. At this point, I’d like to see them doing more tag team wrestling. They’re not bringing anything to Brodus Clay or Sweet T, and both are full of talent. We know what Naomi can do in the ring, and we all want to see Cameron continue to improve. They need more matches, and I firmly believe the crowd would embrace them with open arms even more if they got to see them perform more.

After a Diva lull in the show, Queen Vickie’s job evaluation is about to take place. Gulp! I’m super nervous for her.

Vickie and Brad are in the ring when Raw returns from a recap showcasing the antics of Mark Henry earlier. Vince McMahon‘s music hits and out walks the Chairman of the WWE along with Triple H and Stephanie McMahon. Vickie looks terrified as she sits nervously on a stool, and Brad is standing there looking like he’s posing for Vogue.

Stephanie is the one leading this thing and she thinks the WWE Universe for voting. She turns the floor over to Vickie. Vickie, of course, begins to plead her case to everyone listening and brings up the fact that she has been responsible for some of the greatest returns. She even gives herself credit for getting the Undertaker to come back. Stephanie basically rips that claim to pieces and asks Vickie if she thinks bringing back Brock Lesnar was a good business decision. Vickie looks a bit like a deer in headlights and ends up apologizing for Brock, but surprisingly, Vince backs her up. Vince says that despite the drama, bringing Lesnar back was a good decision and that Vickie is extremely entertaining.

Cue Triple H who decides to barge in. He admits the Vickie is entertaining, albiet unintentionally and basically says she is the worst GM in the history of GMs. He runs Vickie down and says she’s completely horrible at her job, and that the only reason Vince is speaking so highly of her is because she’s spineless and will do whatever Vince wants. Somewhere in there Triple H also disses the Golden Girls, which automatically gives him no creditability whatsoever. But regardless the segment continues on and eventually both Triple H and Vince decide to leave the decision up to Stephanie. Stephanie makes a political decision to use the WWE App results and ultimately Vickie ends up fired.

Vickie’s breakdown is amazing. She doesn’t take the news well at all. Triple H and Stephanie leave, while Vince decides to run down the crowd. Ultimately he ends up naming Brad Maddox the new general manager, saying the people got what they deserved.

I don’t even think anything needs to be said. When Raw comes back from commercial, Vince is backstage with a distraught Vickie.

Vince is promising Vickie that he will make everything right for her, and Brad apologizes to Vickie for taking her job. He thanks Mr. MacMahon for giving him the job, and extends his hand. Vince looks at it in pure disgust and Brad promises he will do the best job he can. Vickie ends up attacking Brad, and beating the crap out of him, much to my delight. Vince finally pulls her back and ends up just leaving Vickie there. Talk about having a mental breakdown.

Boy, tonight is Diva Madness and I’m honestly blacking out right now after that Wyatt Family debut. Holy freaking crap that was the greatest thing I have ever seen. Ohmygod! Anyway, Brie and Nikki Bella are at ringside for commentary when Alicia and AJ take on Kaitlyn and Layla.

This match is such a blur to me because I’m not really registering what I’m seeing. The end though… class. Kaitlyn spears AJ on the outside of the ring after some shenanigans, and the women end up having to be separated. AJ is out cold as Kaitlyn just unleashes on her, and this is better than anything we have gotten since Extreme Rules to be honest. I love the aggression Kaitlyn showed, and I enjoyed seeing AJ take the fall for a change. I’m a bit skeptical on whether or not they can follow up their Extreme Rules match, because it was just so good. The build for the rematch has been very bad and very weak, not their faults obviously. They can’t help what they’re given to work with and I can only hope that they are able to live up to what they did last month.

Apparently, we’re not done with Vickie just yet.

Okay, really? I don’t even think I will recap that.

Overall, Raw delivered tonight. Such a solid show going into Money in the Bank, and I hope SmackDown can give us something incredible for Kaitlyn and AJ. They do honestly deserve it and I want to be excited about this rematch. Right now, I feel like the ending will be very predictable and I don’t really get hyped up for matches when I feel that way. Regardless, tonight was so much better than the past few weeks that I really don’t want to complain. I’m going to just leave it be, take Raw to bed with me, and dream of Bray Wyatt.

Until next time (and I know secretly y’all just can’t wait)… Khaleesi out!