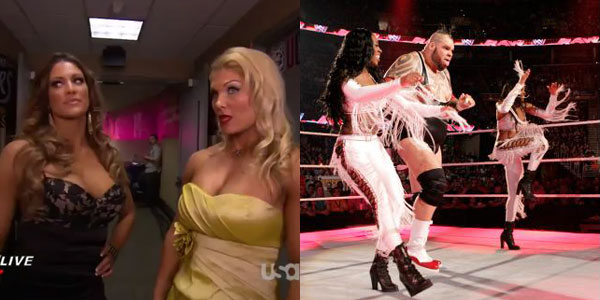 Greetings everyone, and welcome to another enchanting edition of the Raw Redux. I’m sure not seeing Khaleesi Cryssi will displease some of you, but she has to work hard for her Miami money, and thus I will be joining you for the next four weeks as we lead into the brilliance that is WrestleMania 28! This week on perhaps the best Raw I have ever seen in my life, Eve and Beth Phoenix were spotted backstage together, and both AJ and Aksana were involved in various segments throughout the night. And then there’s the big one: In what made my entire night fill with sunshine and positivity, Naomi and Cameron returned to TV alongside our resident Funkasaurus! Alright now, let’s get started with this funkiness before I have to pause writing in order to go rewatch their glorious return again.

First up, we go to the commentary table where Michael Cole and Jerry Lawler discuss an interview that took place on Extra with Maria Menounos talking to the Bella Twins and Alicia Fox. Some clips show of Maria’s past experiences in the ring, before we go to the Bella Twins discussing how they hope to see the Divas featured on WrestleMania. Alicia Fox also discusses how she’s trying to find the right attire for the show since it’s either “big pimpin’ or go home'”!~ Maria Menounos asks their thoughts on Cena/Rock, which Nikki sites Cena for the fact that he trains every day and the Rock takes breaks in between. Menounos plugs the main event of the big show, before we take it backstage to Eve Torres!

With a hand on her hip, she struts around until coming across Zack Ryder. He claims that when she kissed him last week he felt something he never felt before, but wonders why she has ignored him ever since. Eve states that she’s not playing him, rather he’s playing himself and that they should be friends with benefits! Eve wonders if he would like to grab dinner after the show tonight, and he immediately agrees before being cut off by our M.I.A. Divas Champion, Beth Phoenix!

Beth bursts into the scene and says that she can’t believe Alicia Fox and the Bellas were on Extra instead of her. Beth claims that since Maria Menounos keeps showing up in WWE, perhaps she should pay her a visit to Extra… Oh God, please don’t tell me this is a new direction for WrestleMania. Eve chimes in that Beth’s idea is actually not bad (yes it is Eve, yes it is!), before asking Ryder to leave. Beth says that she’s been meaning to tell Eve that she loves how she is able to control Zack and pull him around by her every word, asking if Eve would mind if Ryder was smitten for Beth? Eve actually informs Beth that she WOULD mind, before walking off and leaving the Divas Champion to stare off in the distance.

As a tear forms in my eye from the sheer happiness I experience right now, we are taken to a video clip highlighting the return of Brodus Clay! I personally try not to believe it can be real, and that something will happen to force it to be bumped, but we return to Raw and see Jinder Mahal placing his sacred hat inside a box to bestow honor and dignity upon his culture when suddenly…

THE MOMENT I HAVE BEEN WAITING FOR….

We are cut off by the sensational voices that belong to both Cameron Lynn and Naomi as they introduce our Funkasaurus to the ring and get a great reception from the crowd! I question if I’m dreaming right about now, but I am not! The two Divas pop out from the back in some new white get-up and proceed to delight us all with their patented dance moves of greatness. Brodus then skips out from the back and the three strut down the entrance ramp towards the ring! As Michael Cole does perhaps the only thing right in his life by naming off both Cameron and Naomi to the millions watching around the world, the two Divas put their bottoms up for their trademarked ring pose while dancing Brodus to the ring.

Once inside, all three get DOWN with their bad selves (yes I did just say that) and sway side to side as Brodus busts out the pterodactyl claws! He removes the pants as the pyro goes off and we get ready for some action! Jinder slides into the ring and tries to ambush Clay, but Brodus quickly takes him down with a headbutt to the chest. From there, Brodus hits his Sheeee-plex and runs off the ropes with a huge splash for the victory! Naomi and Cameron (and myself as well) begin to get down in celebration at not only Brodus’ victory, but the fact this amazing group is finally back on TV where they have been sorely missed. Amazing.

In the midst of a fantastic match between Dolph Ziggler and Sheamus, we are taken to the skybox where Josh Matthews sits ringside with both Daniel Bryan and AJ! Looking tremendous as ever in her first skybox moment (so proud I could cry) AJ sits alongside her champion as Josh questions Daniel’s actions in telling her to shut up last week on SmackDown. Bryan wonders what Josh is talking about, stating that he would never say anything to upset AJ and how dare he judge their relationship. Daniel asks AJ if he was rude to her, and she, like the victim of this duo we know she is, simply agrees with Daniel in that he was completely fine. Josh tries to conduct his interview, but Daniel cuts him off and adds that he doesn’t care what anyone thinks… AJ loves him and the feeling is mutual.

Also, check out Aksana as she hilariously walks down to the ring with Santino for what looks to be a mixed tag team match gone wrong…

Thoughts: Honestly, I’m going to start out with what made me the most pleased and that was the amazing, phenomenal return of Brodus, Naomi, and Cameron Lynn. I don’t know what happened to take them away from me… I mean, us, but I think it speaks volumes that even after all those weeks away, they still got such a great response from the crowd. When it was announced they would be returning, I thought it was some cruel joke and Johnny Ace would walk out to call the match off, but I’m so ultimately pleased that did not happen. All three looked great, and I’m so glad to have them back on TV. I don’t really care if they keep having squash matches… I’m just thankful I can finally rest easy as they have actual spots now because I honestly believed it was over for good when all that time passed. Thank you whoever made the call to return them to me… oops, I mean us!

The backstage segment was interesting to say the least. It kind of looks like WWE has already given up on Eve and Kelly’s angle together with no mention of it at all tonight, and perhaps are going in a new direction involving Beth? I’m not sure if it would involve Maria Menounos since she’s been cast on Dancing with the Stars and I really hope it doesn’t. Nothing against her, or involving celebrities at ‘Mania (because I was legitimately a large supporter of Snooki last year), but she’s not really a big name and I doubt the fans would give much of a reaction as they did to Snooki (albeit negative at the start and positive at the end). She’s already competed in various multi-Diva tag matches so there’s not really that feel of “this is the first time we’re seeing this match” sort of thing. I know WrestleMania is never a good time for the ladies, but honestly, there are so many other people that could be involved in this angle and at least make it seem fresh instead of someone we’ve already seen multiple times who isn’t really a huge name in pop culture anyway. I try not to get too bummed out for Diva matches at WrestleMania but that’s kind of even below my already low expectations. That should please some of you who feel I’m too positive regarding the Divas!