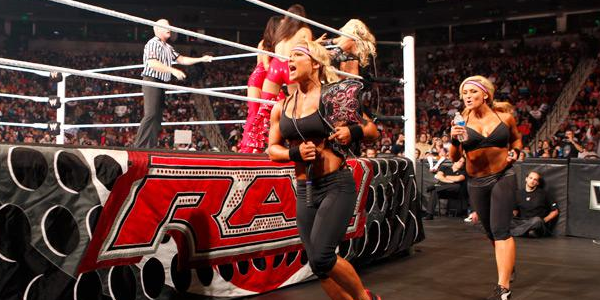 If the WWE is giving us the gift of amazing Diva matches this holiday season, then they fell short on Raw this week. I’d like to sit here and say that what was offered to us was short, sweet, and to the point, but it was just short. There was no point that I could find, and it was about as sweet as a piece of freeze dried tangerine. That analogy really makes no sense whatsoever, especially since I have no idea if freeze-dried fruit is sweet or not, but I’m grasping at straws this week for something witty to write and nothing is coming to mind. I guess that happens as you get older, or your brain gets fried from trying to think too much. Lets get on with it, shall we?

My beloved Bella Twins returned to wrestling this week in tag team action. Brie and Nikki faced off against Kelly Kelly and Alicia Fox. All four girls started off by taunting one another, until it was decided that Kelly and Brie would begin the match. The bell rang, and the twins used stall tactics to delay the inevitable. While that mess was going on, the Divas Champion, Beth Phoenix, and her partner-in-crime, Natalya, jogged out to the ring. Yes, jogged. Work-out clothes, the works. Kelly got distracted and that allowed Brie the opening she wanted, and she attacked the blond from behind. Beth and Natalya continued their run around the ring, perhaps they were just bored that creative had nothing for them, and Brie threw Kelly in the corner. She tagged in Nikki, and they used the chance to double-team the Maxim covergirl. Brie stepped out of the ring and Kelly got back to her feet. She leveled Nikki with a hearty slap to the face, and tried to follow it up by whipping the sassy twin across the ring. Nikki was able to reverse it, but it still worked in 2K’s favor. Alicia was able to make the tag while Kelly took Nikki down with a spinning head-scissors.

Foxy bounded into the ring, Nikki withered in the corner, and Kelly called for her patent stink face. Brie ran interference and pulled Kelly out of the ring, and Nikki took advantage of Foxy and bullied her against the ropes. Foxy fought back, and Nikki sent the future Mrs. Husky Harris (that’s for you Bobby) across the ring. Alicia came flying back and smoothly slipped under Nikki, baffling the brunette, who then ate a face full of mat. Alicia pulled off a beautiful heel-hook take down and ended the match with a nice front somersault into a leg-drop. My favorite referee Scott Armstrong counted to three, and the tandem of Alicia and Kelly scored a nice little victory. The Bella twins went off to lick their wounds, and the victors celebrated their victory.

Just another day in Diva-Land I suppose.

The match was fine, just short and pointless, and I’m left with more questions than answers. That’s not always a good thing. There was no Eve-sighting this week, so I guess she’s still selling the top rope Glam Slam? With Alicia getting the pin, I’m more convinced than ever that she’s going to be the next challenger, but what in the bluest of hell was the point of the DoD around the ring jog? SmackDown is live tonight, so maybe something will happen there, but I’m not holding my breath. They seem content with continuing the AJ/Kaitlyn storyline, and I’m fine with that. Whatever gets AJ and Kaitlyn more TV time. Sadly, I’m more interested in AJ/Kaitlyn right now, than anything going on with Raw, and yes, throw Daniel Bryan in that mix as well. Who even knows at this point what will happen. I certainly don’t. Maybe next week will be better.

Until next week… Cryssi out!